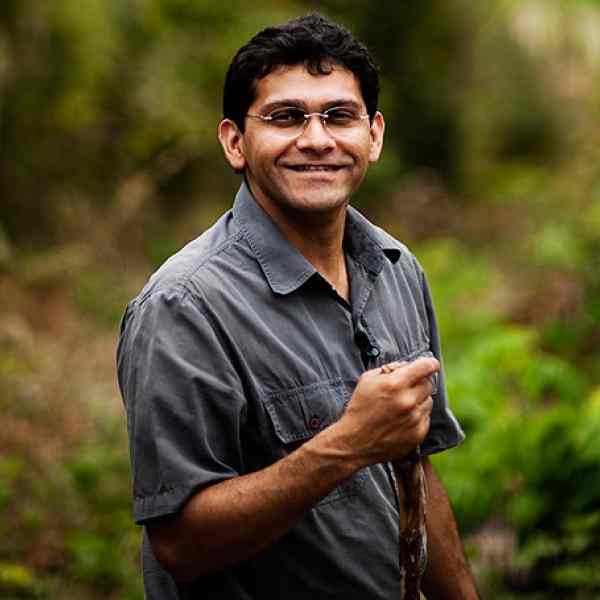 In the sertão "hinterlands" of northeastern Brazil, Francisco Alemberg de Souza Lima offers children dignified alternatives to exploitative labor by presenting opportunities in communications, media, and tourism. As a result, with their own creativity and enhanced education, the region's young people are leading their communities toward economic revitalization and cultural rebirth.

Alemberg is using communications training and youth empowerment to invigorate one of Brazil's poorest regions. The simple concept of providing new opportunities for children to act as the catalyzing force behind change is at the heart of his innovation. In the middle of the dry northeast sertão, Alemberg has opened a space for children to develop their talents by channeling the energy of youth into new opportunities for education, professional training, and social transformation.

From directing a communications school to managing a radio station to serving as museum guides, young people are at the helm of initiatives that have already transformed the city of Nova Olinda and are sending ripples throughout Brazil. Attracting nearly 3,000 tourists a month, the once stagnant economy of this isolated town has been revitalized by the children's creativity, rather than thwarted by their exploitation. As they study methods of communication from prehistory to the era of multimedia, the youngsters rediscover their culture and become stakeholders in its preservation. Alemberg's program allows even the poorest youths not only to take pride in their culture but also to play an active role in its development.

Ranked 69th on the 2001 Human Development Index, Brazil has the world's most unequal distribution of wealth, with more than one-fifth of the population living on less than $2 a day. This picture of poverty is especially grave in the Northeast, where 27 percent of the country's total population represents only 15 percent of Gross National Product. In recent years, the economic situation has become even more bleak, resulting in a sharp decline in employment.

The economic problems that affect the country are felt with greater intensity in the small interior cities of Brazil. In the midst of the sertão, dry, semidesert land the city of Novo Olinda faces isolation, periodic drought, and environmental degradation. The municipality has 11,000 inhabitants, 8,000 of whom live in the surrounding rural zone, dedicated in large part to subsistence agriculture. Ninety percent of families live below the poverty line.

Young people are the most pronounced victims of poverty, isolation, social exclusion, and lack of opportunities in the labor market. Sertão children tend to drop out of primary school to contribute to their family's income. Typically they help in the region's fields or calcium mines. Even the youngsters that attend school work part-time with their relatives and neighbors. Despite Brazilian liquor laws that prohibit serving people under 18, many sertão youth spend most of their free time drinking in neighborhood bars. Besides contributing to high rates of alcohol abuse, the lack of options for young people also leads to their exploitation in the form of child prostitution.

The poor human situation in the region is accentuated by pressures on the natural environment, characterized by unsustainable use of the land and extraction of resources. Nevertheless, the sertão possesses natural beauty and a rich history, thus great potential for tourism. In addition to having Brazil's first national forest, the region also holds the world's largest deposit of fossils from the Cretaceous Period.

In his Casa Grande Memorial do Homen Kariri Foundation, Alemberg has created a place where young people can develop their skills and creativity and so rejuvenate Brazil's northeastern hinterlands culture. His strategy, simply, is to put kids in charge of the region's development. The extreme poverty and lack of opportunities for youth in the sertão have long concerned Alemberg. He gained the rights to his grandfather's former home, the oldest house in the sertão community, and opened a small museum with artifacts he had collected from the region. As he noticed the particularly positive and enthusiastic response of the youngest visitors, Alemberg launched a program to train children as tour guides, and eventually, he put them in charge of the museum's general management.

Based on the success of this first child-based initiative, Alemberg created the Kids' School of the Sertão, training youths as the leaders in the local fight against poverty. The school focuses the participants' energy on their education by utilizing communications media as tools to build esteem and counteract the self-doubt that often leads to alcohol abuse, teen pregnancy, and social withdrawal. For the school Alemberg designed 10 communications laboratories in which students develop media programs for their peers through workshops and technical support. In the laboratories, children are trained in production techniques for music, radio, theater, television, video, publishing, museum anthropology, and the Internet. The young people use these skills to mobilize their community through education campaigns, creating informative magazines, books, videos, radio programs, and comic books. All content is created by children and reaches tens of thousands of young people in and around the sertão. One of the radio station's nine year-old announcers first coined the slogan: "Here, all is created, nothing is copied, we educate!"

Each month, 2,000 students from primary and secondary schools around the region visit the Kids' School or take part in other foundation activities. The prerequisite for participation is regular school attendance and good grades. The laboratories each focus on a different communications career path and are developed alongside, not in place of, the students' public school curricula. Seventy young people facilitate activities at the school and Museum of Anthropology and 120 more participate in the multimedia program. Over the course of its short existence, the foundation has already been referred to as a national leader in promoting youth leadership, proving that young people can be creatively engaged at very low cost. The work conducted with the boys and girls of Nova Olinda has also successfully changed the socioeconomic profile of the local population. Alemberg's organization attracts nearly 3,000 visitors per month, thus helping the municipality attain the Brazilian Tourism Company's tourist destination classification. Alemberg established a partnership with the Brazilian Service to Support Micro and Small Enterprises to provide tourism training to the parents of children involved in foundation activities. The partnership has already resulted in the creation of four formal and seven informal community inns, more than doubling the income of each participating family.

Alemberg envisions a space like the one he created in Nova Olinda for every city in Brazil, where children can become cultural protagonists and communities follow suit to generate revenue and improve their overall standing. He is promoting the Casa Grande and Kids' School models by hosting visits from youth activists and educators from around the world and by working directly with national and international organizations on idea exchanges. In January 2002 Alemberg will travel to Mozambique with children from his program to spread his methods to Africa. To support expansion Alemberg has also created partnerships with the municipal government, the Federal University of Ceará, and UNICEF.

Alemberg was born in Crato, a neighboring township of Nova Olinda, to descendents of the Kariri indigenous group. His father was a strong role model, introducing Alemberg to communications through the live radio programs that he transmitted to the community through a make-shift network of speakers strung throughout the town.

When Alemberg was 10, his parents divorced, and he moved with his father and brother to the state of Goiás. In his new city, completely isolated in the middle of the Amazon, Alemberg demonstrated uncommon creativity and inventiveness. Alemberg created a shadow cinema and one-man-band that became the most popular shows in town. He charged matchsticks for entry to his performances, held at home and at parties. When his father, pleased with the constant supply of matches, allowed Alemberg to use the family typewriter, Alemberg began a small newspaper and comic book that he distributed to neighborhood children. He boosted the popularity of all his ventures by covering community members' performance in local soccer games and promoting various clubs in his publications.

Alemberg never had the opportunity to gain a college education, but he joined the navy to see the world. When he was relegated to mop duty at the local naval office, he set out on his own to travel throughout Brazil and write songs about the natural beauty and cultural diversity he found. Over the course of a 10-year journey, Alemberg gained a new appreciation for his first home in Nova Olinda, remembering its caverns decorated with ancient paintings of local myths and legends. When he returned to the sertão in 1992, he was shocked by the inhabitants' precarious conditions and the loss of identity and pride in regional culture. He saw children as the only way to break the cycle of poverty and environmental devastation. Although they were without voice or opportunity, Alemberg remembered from his time as a youth soccer player that children work harder when there is an opportunity to be recognized by authority figures for their achievements. He founded the Casa Grande Memorial do Homen Kariri Foundation to create a space where children can explore and demonstrate their unique talents.