OUR SCOPE OF ACTION

Ashoka is a catalyst for social change. It is the world’s leading network of social entrepreneurs with more than 3,600 Ashoka Fellows spanning over 90 countries. Amongst the Fellowship there are two Nobel Peace Prize winners.

For the past 40 years, Ashoka has been identifying, selecting and supporting leading innovators with systemic solutions to society’s most pressing problems.

We do this by:

Ashoka was launched in Belgium in 2008. Since then, we have elected and supported 17 social innovators as Ashoka Fellows  who have positively impacted the lives of thousands of people. We have been working with 12 Changemaker Schools and we have been supported by 19 philanthropic business leaders as part of our Ashoka Support Network.

For more information about Ashoka in Belgium, have a look at our latest brochure.

Find out more about our Belgian Fellows

Find out more about  Selection Criteria to become an Ashoka Fellow

We are looking to elect our next social entrepreneur! If you would like to nominate a fellow, please fill in the form or email p[email protected]

2. WE CREATE THE NEXT GENERATION OF CHANGEMAKERS

Through the Changemaker Schools programme, Ashoka aims to catalyse changes throughout schools and the wider education system.
Building on our experience with social entrepreneurs, we are now working with a growing network of 200 Ashoka Changemaker Schools and other essential stakeholders to rethink the role of education and restructure how our young people grow up so that everyone can become a changemaker.

More information about CMS in Belgium

3. WE BUILD BRIDGES ACROSS SECTORS

Finally, Ashoka believes in the power of collaboration to create long lasting systemic change. Only by working across sector and breaking down siloes, will we be able to support and scale solutions to our world’s pressing problems. Businesses have the power to drive social change, and at Ashoka, we find the right partners to make that happen. From successful business leaders to visionary corporations, Ashoka is growing a network of like minded people to support the work of our Ashoka Fellows.

In 2021, NGO Advisor has ranked Ashoka among the Top 10 NGOs in the world and is still growing as the largest network of social entrepreneurs worldwide. 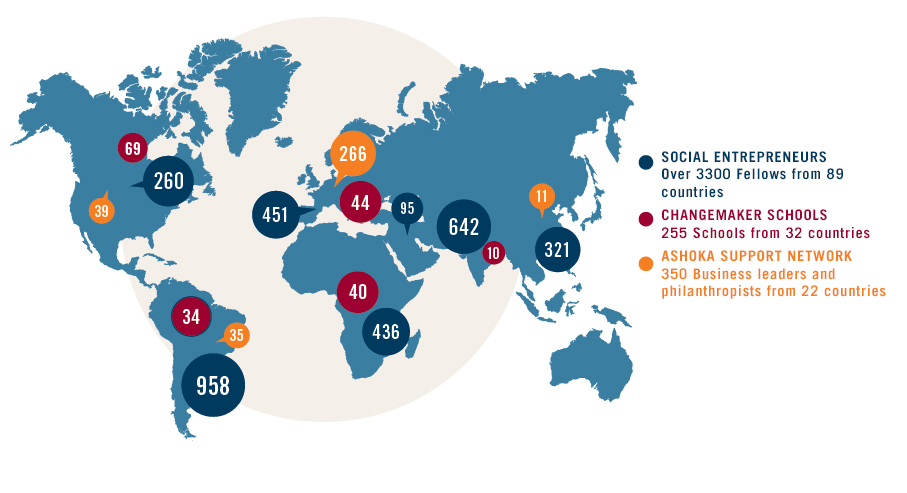 In Belgium, we have a support committee called the CODAC, which is recommended and implemented for each new Fellow joining Ashoka. This committee is composed of the Fellow and three to four ASN members committed to supporting and counselling the Fellow. The aim of CODAC is to guide the Fellow in their entrepreneurial track and help them with personal or professional issues to allow them to move forward in the development of their project. Sessions between the ASNs and Fellow are organised at regular time intervals but may include a Senior Fellow or another guest on certain occasions.

Find out more about the ASN

Ashoka Belgium conducted from 2013 to 2020 the IMPACT program on a yearly basis, which aim at identifying socially innovative organisations with strong changemaking potential in a specific field, to professionalise them help them to grow and spread their impact.

Learn more about this programme