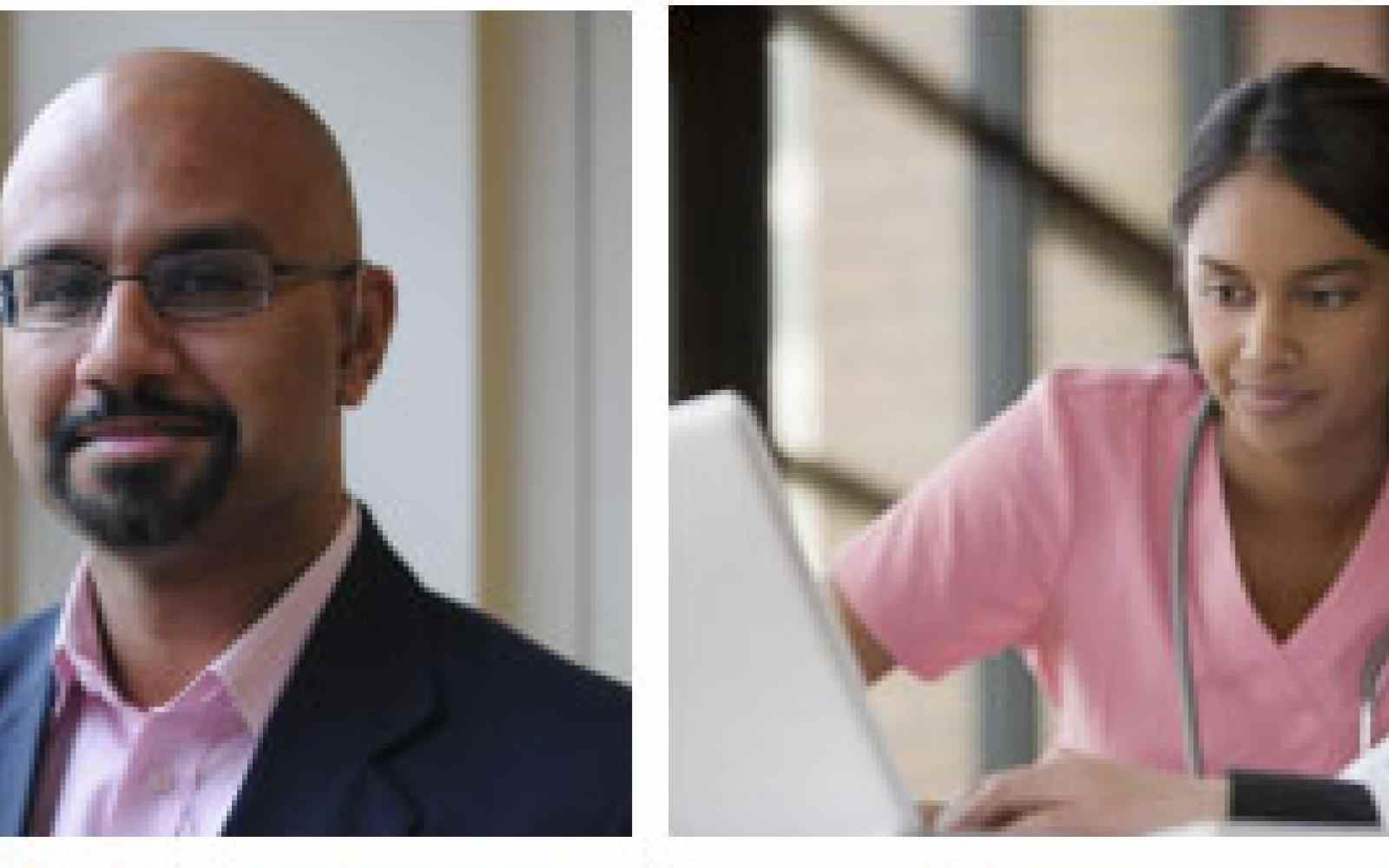 Changemaker Health Series - Case Study No. 1
Put patients in control of their healthcare through patient-owned and patient-managed data

WHAT IF every patient could have seamlessly coordinated care and guide their own path to health and wellbeing by having full access to their medical records in one centralized place?

Patients Know Best (PKB), founded by Mohammad Al-Ubaydli, is a personal health record company that provides patients with a secured online space to invite their clinical teams and family members to view their health records. Mohammed’s goal is to equip patients to be active participants at the center of their care, rather than passive recipients, thereby increasing the quality of care and reducing healthcare costs over the long-term.

PKB provides patients with access to and control over their medical records and provides clinicians and healthcare organizations with a platform to securely communicate and collaborate with patients to deliver coordinated care. Patients can use the platform to send secure messages to their doctors with questions, hold structured online consultations, and chat with other patients. Patients Know Best connects all elements of a patient’s care into one online space entirely controlled by the patient, thus creating a more efficient and streamlined governance model for a patient’s health journey. PKB is integrated into the U.K.’s National Health Service secure network for use by any patient with any clinician in the U.K. or overseas and is getting ready to scale to other countries.

The PKB model of patient-owned and controlled medical records stands in contrast to the more widely used computerized or paper-based medical record systems, which are maintained by health professionals and confined to specific hospitals or clinics.

“When you put [data] in the patient's hands, then they'll find ways of using all these tools in their interests… It's really oriented around the citizen, and making them get the benefits. And then they can help the healthcare system as a side-effect.”
--Mohammad Al-Ubaydli

Al-Ubaydli struggled throughout his youth with a rare genetic immune deficiency that doctors had difficulty diagnosing. Because his symptoms were so unusual and his family moved from country to country so frequently, his mother decided to start keeping a meticulous record of his condition. It was this record which eventually enabled doctors to diagnose his condition at the age of 15. As a result of his illness, Al-Ubaydli lost some of his hearing and spent long periods of time out of school, which made him study independently and use computers at home to help him with his schoolwork. Later, as a medical student, he was often sought after by professors for his programming skills. At the medical school, Al-Ubaydli spotted many inefficiencies in the UK’s healthcare system and was disillusioned by the reluctance among some medical professionals to use technology to make their work more effective. Al-Ubaydli’s first experimentation with empowering citizens with knowledge was when he set out to provide digital versions of medical textbooks. He published a medical book and then set up a website called MedicalApproaches.org which allowed him to distribute the book free of charge and receive thousands of downloads from around the world. Shortly afterward, medical publishers started to make their textbooks available on handheld devices.

Changemaker Health Design Principle: Put individuals in control over their own health information

The Patients Know Best model showcases a key strategy for cultivating changemaker health, or the movement toward patient empowerment within healthcare systems. One of the essential components of enabling changemaker health is for patients to have access to and control over their personal health information, including medical records and other data that informs their health and wellbeing. When individuals are better informed through access to and control of their health records and data, they are able to better direct their own care and co-create their health journeys with their providers. For more information about changemaker health, check out our blogpost.

Evolving beyond granting patients access to their personal information, the next step toward building an infrastructure for changemaker health is for institutions and service providers to integrate client-controlled data into their core operations. Al-Ubaydli believes that medical school students should be trained not only in how to transmit data to their patients but also in how to co-create treatment plans with patients who are equipped with their own data.

Al-Ubaydli has found that when he first describes Patients Know Best to physicians, they tend to say that it would be inefficient and dangerous to ask patients to control their own data. When medical schools teach physicians from day one to interact with patients who are managing their own data, however, then the idea of patient controlled medical records tends to seem much less threatening.

The University of Leicester Medical School served as a pilot for training physicians in how to interact with patients equipped with their own data. In exchange for granting all of their medical students free access to Patients Know Best, professors at the university developed a training curriculum to be shared with other institutions. Within the next year, four universities will be incorporating patient-controlled data into their curriculum.

Shifting the perspective on expertise

The training emphasizes to medical students that patients are the experts of their own experiences and their own treatment journey and that the role of the doctor is not to be the top expert on the patient’s care but rather to contribute their area of specific expertise to the wider landscape of the patient’s health journey. The patient is the only one who has been to all their appointments and who knows all the details about their condition. Thus, the training asks medical school students to recognize patients’ lived experience as expertise and respect patients’ rights to own and control their data.

Shifting the perspective on patient capabilities

In addition to shifting perspectives on who holds expertise, the training also challenges medical students to reconsider their prejudices. It encourages providers not to make an assumption about patients’ level of knowledge about their health condition or their ability to make decisions about their own care. PKB asks providers to ask patients early and often about logging in and accessing their information. The majority of patients indicate interest in logging in to access their records, and many patients will say they want a trusted friend or family member to look at them. Even for patients who are elder or who do not have a computer, Patients Know Best has found surprising levels of interest. People chose to access the platform from their cellphone, and elder patients often already have a level of computer literacy. Additionally, the system works in 19 different languages.

Patients own the data and control who can access it

The data inside of PKB is owned by the patients. For other similar models, the data is owned by the medical record company or health institution. The PKB model reasserts the fact that “it’s my body, my data.”

Instead of acting as a benevolent watchdog over sensitive data, as many tech companies do, Patients Know Best puts all of the control into the hands of patients. The data is encrypted, and only the patient and people the patient chooses to release the data to have access to it. All customers sign a contract stipulating this. For many patients, seeing this contract is the first time they are made aware that other institutions and platforms normally own their personal data.

As Al-Ubaydli explains, “Every patient's record is encrypted with a unique public and private key. And if you don't have that private key, which [PKB] doesn't, you can't look at any of the data. So whereas tech companies [tend to] say, ‘Trust us. We will not misuse the data,’ we say, ‘Don't trust us. We cannot use the data.’" In the same way that physicians must ask permission to operate, PKB sets up a system in which physicians must also ask permission to access patients’ data.

“It's the patient who owns the data. That approach breeds trust, and that trust is what allows massive data transfers. When you put them in the patient's hands, then they'll find ways of using all these tools in their interests.”
--Mohammad Al-Ubaydli

Other patient online medical record models tend to be specific to a particular institution--they only record the data from the singular institution that provides the platform. PKB, on the other hand, is a comprehensive log of all of the healthcare that a patient receives across a multitude of institutions. In other models, the patient must manually enter the data, which is a significant time burden for the patient and can result in so many errors and incompletes that no one actually uses the data. The PKB system, on the other hand, seamlessly integrates medical records from across health institutions.

Is it possible for changemaker health to place too much burden on a patient?

PKB gives patients the power of control over their medical care, but not the burden of control. Patients have the ability to make decisions about their own care if they so wish, but they are not required to do so. If a patient is too sick to take control over any part of their care, then the healthcare system is still there to envelop them in support. Patients have the tools they need to be in control when they want to be, but they also have support when they do not want to or are not able to. Additionally, patients have the option to change their mind. One day, a doctor might ask a patient if they would like to access their records and the patient might be too tired to try, but on another day, the patient might welcome the opportunity. Changemaker health is about giving options to the patient, and letting them decide how to engage.

“PKB is about giving the patients the power of control but not the burden of control. So it is all about [PKB] working with the rest of the healthcare system to minimize the input that the patient has to do. And it’s about giving [patients] the information to make the decisions, but it’s not requiring [them] to make decisions, any more than you’re supposed to be doing your own appendicectomy.”
--Mohammad Al-Ubaydli

Ashoka is a global network of leading social entrepreneurs - individuals who tackle society's complex social problems with scalable, innovative solutions. Launched in 2010 by Ashoka and the global healthcare company Boehringer Ingelheim, the Making More Health (MMH) initiative works to identify, support, and scale innovative, entrepreneurial solutions to global health challenges. To date, the MMH initiative has identified and supported 80 social entrepreneurs in the field of healthcare from 47 countries around the world. This article series will synthesize the emerging patterns and insights of the MMH network, as well as other social entrepreneurs working in healthcare, to explore the theme of changemaker health.