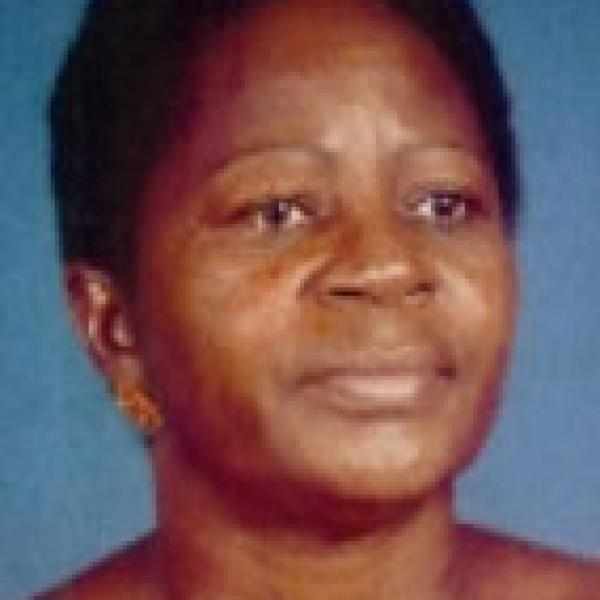 After leading West Africa’s largest self-promotion program for farmers, Rosalie Ouoba is bringing the voice of rural women to bear in West African affairs through the Union of Rural Women of West Africa and Chad (UFROAT). Determined to legitimize the contributions of rural women in the development dialogue, Rosalie is eliminating intermediaries and providing critical communication skills through a regional network based on national and sub-regional associations of women.

Given the right forum and positions of leadership, Rosalie believes rural women can be their own best advocates and improve their socio-economic conditions. As the first network for rural women, one of UFROAT’s goals is to eliminate the harmful practice of others speaking on their behalf, and instead, ensure that rural women lead and speak for themselves. The network transcends national borders to create a regional agenda for rural women while remaining connected to local needs through membership organizations, and markets in each country.
To broaden support for UFROAT without violating the integrity of the organization’s structure, Rosalie formed a network of supporters that includes male leaders, citizen organizations (COs), and politicians. They are members of the Network of Support for Rural Women’s Citizenship in West Africa and Chad and participate in programming at the local level to strengthen the regional platform.

Seventy percent of the population of West Africa is rural women, and they must often overcome extreme poverty to ensure the survival of their families. Development programs designed to assist rural women are sometimes perceived as patronizing, seeing them as a “needy” population, and many of the social and economic development policies directed toward them have failed.
More advanced programs recognize the potential of local and national women’s organizations to prioritize women’s needs as they articulate them. However, even where consultation occurs, ultimately most communication is done by intermediaries. The perception is that rural women lack the sophistication and ability to speak for themselves in decision-making arenas.
Women’s issues have gone in and out of fashion in development and at some point, every citizen organization positioned itself as a women’s group. In this process of changing priorities and shifting alliances, rural women’s voices are lost and their needs are not properly articulated. There is no efficient channel to replicate successful solutions or share ideas across national borders.

Rosalie realized that development efforts for rural women would remain localized and low-impact until women gained a voice, and that it was imperative to change the perception of them as incapable and in need of proxy representation. She visualizes an Africa where rural women’s networks become models that facilitate ideas across borders. To make her vision a reality, Rosalie began attending and organizing regional meetings of women. Out of this experience she created UFROAT to bring rural women out of isolation and to where they could build their future in partnership with other societal actors.
UFROAT maintains a distinctive organizational structure, which works to build confidence and inspire the participation of all its members. Only rural women can be full members and hold leadership positions. UFROAT encourages women to engage in decision-making at the local level using resources learned from the UFROAT network. Understanding one’s capabilities before seeking the assistance of others is a primary message. Through the union, especially regional meetings which are major public forums, women have the opportunity to travel, to experience new things, and to spend time analyzing and seeking new solutions to introduce in their areas. There are countless examples of strategies that have been replicated across borders through the UFROAT network.
The women who participate in UFROAT and its events gain tremendous respect in their villages. A number of UFROAT members have gone on to win political office at the local level. Now in ten countries in Francophone Africa, the union counts approximately thirty member associations per country. These country-level associations carry out the day-to-day operations of the union including the operation of a regional market, which is open to the products of all of the surrounding associations.   UFROAT also collaborates with other programs directed at rural women. Rosalie challenges the intermediaries to stop speaking on behalf of rural women, but to develop programs that encourage women to speak about their issues—including translation and funding for travel. When women design joint operations across countries, Rosalie assists to find sources of funding.
Rosalie is going a step further to ensure that UFROAT survives and thrives, by gathering people who support her movement to the Network of Support for Rural Women’s Citizenship in West Africa and Chad (RESACIFROAT). RESACIFROAT is not a competing institution but exists to work with and help preserve the integrity of UFROAT as a rural women’s organization, leaving room for outside support.

After Rosalie’s mother and father had several girls, her father wished for a son. But instead of disappointment when she was born, she and her father developed a special relationship, providing her with all the opportunities reserved for a boy. She was raised with the firm conviction that she could “open any door” and her achievements would not have limits.
As a midwife practicing in difficult rural conditions, Rosalie was struck by the fighting spirit of the women she helped, despite their difficult lives and daily challenges. Even in the most desperate situations, they always found the necessities for their children and families.
After Rosalie received a degree in Nutrition and Development Health Economics at the Université de Paris and a diploma at the Institute for the Study of Economic and Social Development in Paris, she was recruited by the Center of Economic and Social Studies for West Africa (CESAO), a sub-regional training institution for African (mostly rural) studies to focus on the process of development by self-promotion. She was a teacher and became Director of Programs at CESAO from 1985 to 1993, then General Director of the institution from 1992 to 2002. Thus, Rosalie has 17 years of experience in the management and organization of a sub-regional development program.
In 2002, when CESAO’s priorities shifted from rural areas, she left to dedicate herself to UFROAT. Rosalie is a respected figure in the West African women’s movement, sought after for her ability to analyze problems, facilitate discussions, and find solutions.