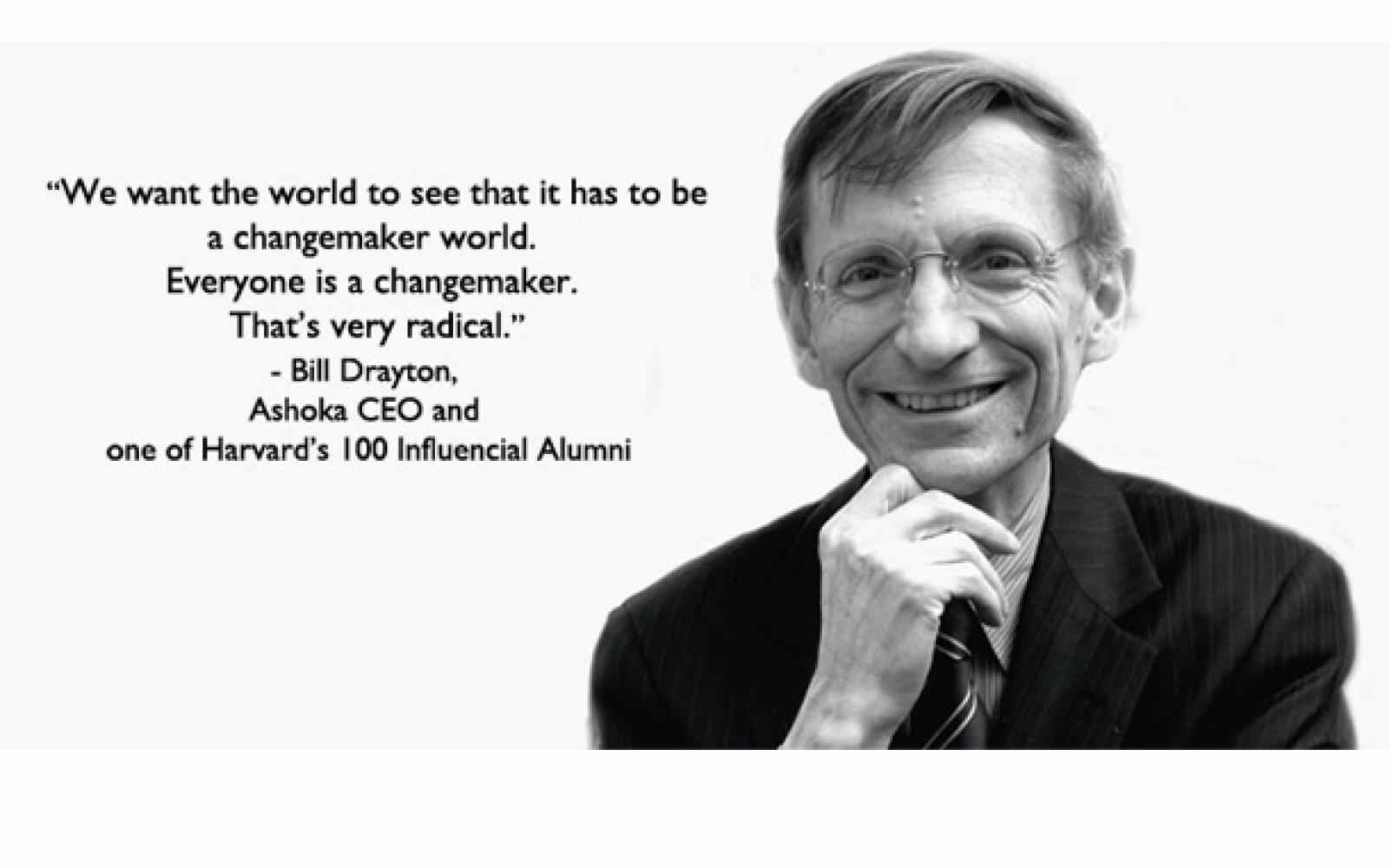 Bill Drayton’s lifetime achievements, which include founding  Ashoka: Innovators for the Public, have earned him the distinction as one of Harvard University’s 100 most influential alumni. But it all started with an elementary school newspaper.

Given the hand he was dealt—a wiry frame unsuitable for contact sports and a strong distaste for math and Latin—young Bill knew he'd be in trouble if he tried to keep up with  his peers. He had to play a different game; one where the cards weren’t stacked against him. So he started a school paper with stories from his classmates, funded by ads from local businesses.

It was this small taste of agency—the ability to enact change—that empowered Bill and gave him the confidence to move on to bigger endeavors.

“[The paper] became very central to me,” he said. “If you want to excel at something—as most kids do—and you’re not particularly great at sports and you wish most academic life would just go away, being engaged through extracurricular activities and in your community is where you can excel”.

The school paper anecdote from Bill’s childhood is laced with a lesson for parents, teachers, and children alike. If you want more changemakers like Bill Drayton in the world, parents need to give their children the space and support to create from a very early age. Teachers need to cultivate leadership, teamwork, problem solving skills, and, most importantly, empathy. Young people, you have to give yourselves permission to try!

“That’s a very complicated set of skills. It’s not genetic,” Bill says, “Children must learn it.”

A child must fully develop their capacity to make change in order to be a contributing member of our changing society. Empathy is a long-standing concept, but has a new emphasis in this “Everyone a Changemaker” world. This has been Bill’s singular focus.

“Of all the topics around entrepreneurship that Bill could discuss, the one that takes precedence is a seemingly basic one: Empathy,” to quote LifeStyles Magazine’s 2013 New Year article on Social Studies by Scaachi Koul.

Emphasizing empathy instruction in the classroom  is the idea behind Ashoka’s new Everyone A Changemaker education initiatives.. Ashoka learned from Bill’s personal example, and from the insights of our 700 youth and education Fellows, and has made a commitment to transform early childhood education and catalyze a fundamental shift in what society expects from youth.

We are embarking on a Changemaker Schools initiative to employ Ashoka Fellows,  corporate partners, thought leaders, media partners, and members to be a part of the classroom learning experience. We want to this new skill set—with empathy at its core— to be as fundamental to a kid’s education as reading or math. Social-emotional intelligence, and the leadership skills associated with it, builds the foundation that allows someone to be a changemaker.

Empathy is not just as a nice value, it is a critical skill Let’s show the next generation of school administrators and their students why empathy is critical for their success.