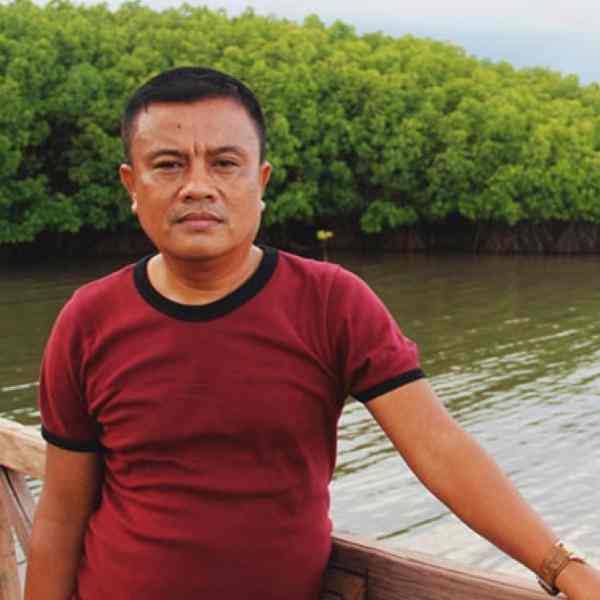 Hidayat Palaloi is tackling the twin challenges of environmental degradation and poverty in Indonesia's coastal communities by protecting endangered mangroves through conservation, community education, and sustainable cultivation of crabs.

Hidayat's organization has changed the standard practices for replanting Indonesia's fast disappearing mangroves, working with villagers to develop commercial cultivation of crabs and other marine species to generate additional income as part of village rehabilitation efforts. Hidayat and his organization have pioneered a model that combines the cultivation of mud-crabs with the conservation of mangrove forests along the coast and in integrated coastal ponds. He focuses on the communities and raises people's awareness and skills by fostering self-management. Through mapping and other exercises, program participants have also gained bargaining power to deal with local governments and investors who want to develop businesses directly on the shore, thus becoming an influential and integral part of coastal resource management.

Indonesia is an archipelago of over seventeen thousand islands, yet the government and civil society organizations pay little attention to the needs of the human and wildlife of the coastal regions. In general, coastal people feel marginalized by development policies favoring investors. The standard of living along the coast is much lower than in other areas, rooted in issues of land ownership involving local people, the government, and outside investors. Moreover, laws and policies pertaining to conservation of the coastal environment are unclear or nonexistent. On the island of Sulawesi, there was a 50 percent loss of mangrove trees between 1982 and 1995. Erosion of the coast has reached twenty meters per year in some areas. Existing mangrove regions are endangered by various factors: people cutting down mangroves to construct the type of fish ponds promoted by the Fishery Department, conversion of the region to farmland or residential areas, or use of mangrove wood for buildings, fencing, firewood, or charcoal. Rarely is the ability of the ecosystem to support such activities taken into consideration. Both civil society organizations and the Forestry Department have experienced difficulty in their mangrove replanting projects because they have not fully involved the community.

Hidayat comes from a coastal community in South Sulawesi and understands the problems of these regions. From his experience as a fieldworker with an established civic organization in Makassar, which focused on income generating programs, he realized that more community integration was needed to tackle the problems facing coastal people. In 1995, he established Yayasan Tumbuh Mandiri Indonesia (The Indonesian Self Growth Foundation), or YTMI, with the clear vision to help develop communities in which just relationships and economic independence support the efforts for conservation of the coastal environment. When YTMI began working with mangroves, Hidayat, his team, and the community experimented in one plot by planting directly along the coast. After two years, they realized that a large number of trees were being toppled by waves and driftwood or destroyed by livestock. These early failures led them to undertake intensive surveys of various coastal regions in South Sulawesi, studying the differences in the conditions and the problems caused. They learned from sites in which reforestation had been successful and from areas in which intervention had failed, drawing significantly from models based on traditional fish ponds. In these ponds, leaves from the mangroves fall and become food for fish and mud-crabs, which thrive among the mangrove roots. One of the innovations from Hidayat and YTMI has been the use of space behind homes, previously considered to be wasteland, for these small ponds. The ponds help protect the coast from abrasion, provide shade and an attractive environment, and help villagers earn extra money. Hidayat works only with communities where problems are particularly pronounced and that are in a strategic location for spreading to neighboring communities. His work involves forming groups or strengthening existing community institutions that become part of the YTMI national network and provide case studies and best practices for expansion. First, a preliminary workshop is held for all regional stakeholders, including villagers, local leaders, regional government officials, and representatives from fisheries, forestry, and agriculture. Local conditions are analyzed to determine the optimal size and location of ponds and whether or not to plant mangroves along the beach. Community members are invited to visit successful sites to talk with and learn firsthand from other communities. As a second step in Hidayat's method, YTMI holds year-long trainings for the villagers in such topics as group management, mangrove rehabilitation, environmental conservation, and crab cultivation. When the mangroves are mature enough, the community builds collective crab pens, specially designed for the local people's needs and market potential. Fish heads are used to fatten the crabs, providing another source of income for the wives of fishermen, who sell the waste from their husbands' catch. An average crab harvest under Hidayat's program yields between seven hundred fifty thousand and one million rupiah of new income&#150;a substantial boost to local wealth. Eventually, the skills the group members have developed under YTMI's supervision enable them to build their own crab pens and ponds and independently sustain the local crab industry. During the two-year period in which Hidayat's team works intensively with the communities, they conduct environmental research, such as cataloguing the biodiversity of the region. Through mapping, the villagers get a clear picture of their land and understand the relationship between residential, developmental, agricultural, and communal property. Hidayat also provides coastal villagers with information on land policies and regulations so they can advocate for fair distribution of land and protect their homes against outside developers. Community pressure on the government has also influenced the passage of a local ordinance to prohibit the use of coral reef for building material and has successfully gained funds for two mangrove rehabilitation sites.

Hidayat's family is Buginese, an ethnic group known for its skill in fishing and sailing. As a result, he has a special empathy for people living in coastal regions. As a child, he was kept busy every day with full courses in academic and religious studies. In high school, he went on his own to study in Makassar and gained a scholarship to study economics at a local university, where he was recognized for his campus leadership. In his role as a student organizer and activist, he acted as a mediator in several of the community's most important and hotly debated issues. While still in college, Hidayat worked as a fieldworker for an organization involved in rural development and taught at an academy after graduation. Resisting the pressures to follow in the footsteps of his civil servant parents, Hidayat decided to devote his energy to working with grassroots action groups in coastal communities.