Sustainability and awareness for resilience 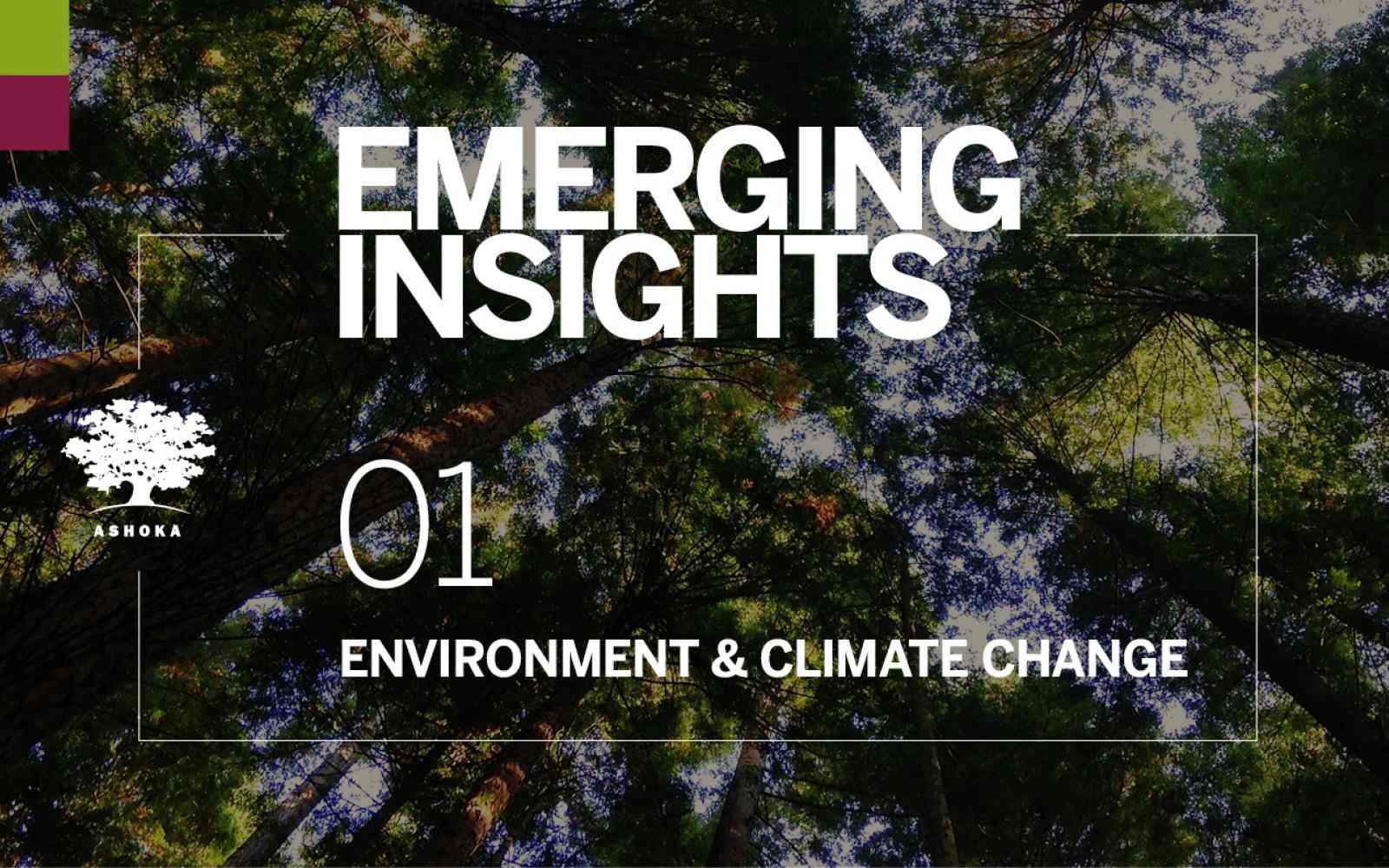 According to a study launched by the United Nations, the current world population of 7.6 billion is expected to reach 8.6 billion by 2030, and 9.8 billion in 2050[1]. Humanity is devouring our planet’s resources in increasingly destructive volumes. In 2019, we consumed a year’s worth of carbon, food, water, fiber, land and timber in a record 212 days and to maintain our current appetite for resources, we would need the equivalent of 1.7 Earths[2].

It is becoming increasingly clear that policy change and advocacy alone are not enough to shift the current reality of a warming planet. Social and individual responsibility will be key factors. By putting young people, and the most affected vulnerable communities in charge, our Fellows are leading the way to showcase a new generation of leaders in climate change and the movement for the environment.

Creating actionable goals that are participatory and can be embodied at every level is a key method to offset our current consumption patterns. This year’s Fellows are making environmental impact by localizing solutions, developing research agendas that lead to action, and helping communities to shift their production and consumption habits.

Currently, humans consume renewable resources and pollute the planet at a rate higher than it can sustain. The deterioration of the environment around the world has escalated because of factors like industrialization and urbanization, as well as the global supply chains that lead to mass production and over-consumption. Over the last 25 years, the UK’s Sue Riddlestone has been a leader in the sustainability movement.

United Kingdom
Bioregional
She’s grown multiple successful businesses that provide models for sustainable living. Her company, Bioregional, pioneered the One Planet Living Framework that consists of ten simple principles that make it easy to plan, deliver and communicate a commitment to sustainability. The framework is used by individuals, communities, corporations and national governments to act. From one community in her country she has spread this model to the UN and played a pivotal role in the development of Sustainable Development Goal 12: Sustainable Consumption and Production.

The global battle to change human consumptions patterns is happening worldwide. Hong Kong leads the world in meat consumption[3]. The methane produced by the livestock that feed Hong Kong is the most potent greenhouse gas and accounts for 14.5 to 18 percent of human-induced emissions[4].

Hong Kong
Green Monday
Through his organization Green Common, David Yeung is convincing a significant part of the population of China to reduce meat consumption without giving up their preferred diets. He is making plant-based diets aspirational by both creating and distributing meat alternatives like Beyond Burger, Beyond Bao and Just Scramble through his Green Common stores. Chinese consumers can experiment with plant-based options without necessarily having to alter their diets and tastes. He currently owns and operates six stores in Hong Kong, with an additional 200 outlets distributing his products.

Raising awareness from the grassroots up

Tens of millions of Americans are exposed to unsafe drinking water each year[5]. The most vulnerable tend to be in communities of color in rural areas who can only wait for governmental infrastructure to catch up. With a background working on community-led solutions in South Sudan and Cameroon in the Water and Sanitation for Health (WASH) sector, George McGraw helps American communities build and manage low-cost systems that bring safe hot and cold water into homes, schools and community centers.

United States
Dig Deep
His organization DigDeep equips Americans with the tools to develop and manage their own water access projects like a first-of-its-kind micro communal water system with central cisterns that bring clean indoor running water to nine towns in the Navajo Nation. Currently serving 550 families in New Mexico, Utah and Arizona, DigDeep helps them to install stand-alone Home Water Systems, while engaging in research and raising awareness on national platforms about the roots of water poverty across the United States.

Cities hold a promise of helping us to combat the global climate crisis, especially where sustainability has gone hand-in-hand with urban development, but they also create risk. Urban centers around the world occupy just 3% of the earth but are responsible for 70% of its carbon emissions. 70% of Latin Americans live in cities and most feel poorly informed about the science and evidence of their environmental impact. To inspire a more informed citizenry with the tools for change, Juliana Gutierrez founded the Low Carbon City Foundation in her hometown of Medellín, Colombia, which has evolved into a citizen-led global platform that educates, connects and helps citizens to create tools to enhance low carbon lifestyles. This is predominantly through Low Carbon Districts where residents work together to support low carbon transportation, zero-waste solutions, green spaces, urban gardening and sustainable markets. Global initiatives include connecting a network of over 30 Ambassador cities, advocating for change through citizen-led global forums, and linking innovators who are developing low carbon solutions worldwide.

Natural disasters like floods, cyclones, droughts, heatwaves and landslides all regularly threaten human life around the world, but most especially in countries in the Global South where disaster management is often not a priority. Manu Gupta brings a life-cycle and humanistic approach to disaster management in India.

India
Sustainable Environment and Ecological Development Society (SEEDS)
Currently, natural disasters are addressed in a top-down, decentralized manner. Different government bodies provide relief, rehabilitation, and reconstruction. No single agency focuses on the entire life-cycle of a disaster in a comprehensive way and communities are largely left out of the process. Manu is changing this system by centering disaster response around the communities themselves. His organization SEEDS collects solutions directly from community members and facilitates the implementation of these solutions with local leaders. SEEDS also helps communities develop creative early warning systems and local disaster management plans and conducts regular mock drills. He has partnered with Google and Facebook to create live flood maps and to track disaster-induced migration to aid in this process. He also works closely with government agencies to implement locally- sourced solutions for reconstruction. By harnessing the creativity of those most affected by disasters, Manu is piecing together India’s fragmented disaster response system while giving a voice to previously neglected at-risk communities.

Of the nearly 3,600 Fellows who have been elected over the last 40 years, 12% are explicitly working to change systems to improve human impact on the environment. Beyond finding the latest innovations, Ashoka develops programs to support the expansion and replication of new ideas through trainings and strategic connections. This year, in partnership with social change consulting firm iPropeller and support from the Flanders government, Ashoka created ACCESS – Accelerating Climate Change Solutions in Africa. Although the African continent contributes just 4% to global greenhouse emissions, it is being hard hit by its effects[6]. Driven by the urgency of this issue, social entrepreneurs were brought together for a social investment accelerator program to refine financial plans and pitches to impact, philanthropic, and institutional investors. This accelerator will be followed by a Social Change Marketplace in 2020 where innovators will be matched with corporate players and receive one-on-one consultations with potential partners, enabling a greater visibility and investment in solutions for this pressing problem.

[3] “HKU Earth Science Study Finds Hong Kong’s Appetite for Meat Causes the City to Be One of the World’s Highest Greenhouse Gas Emitter - All News - Media - HKU.” The University of Hong Kong, 30 Mar. 2018.

[6] Selormey, Edem. E and Carolyn Logan. “African Nations Are among Those Most Vulnerable to Climate Change. A New Survey Suggests They Are Also the Least Prepared.” The Washington Post, 23 Sept. 2019.