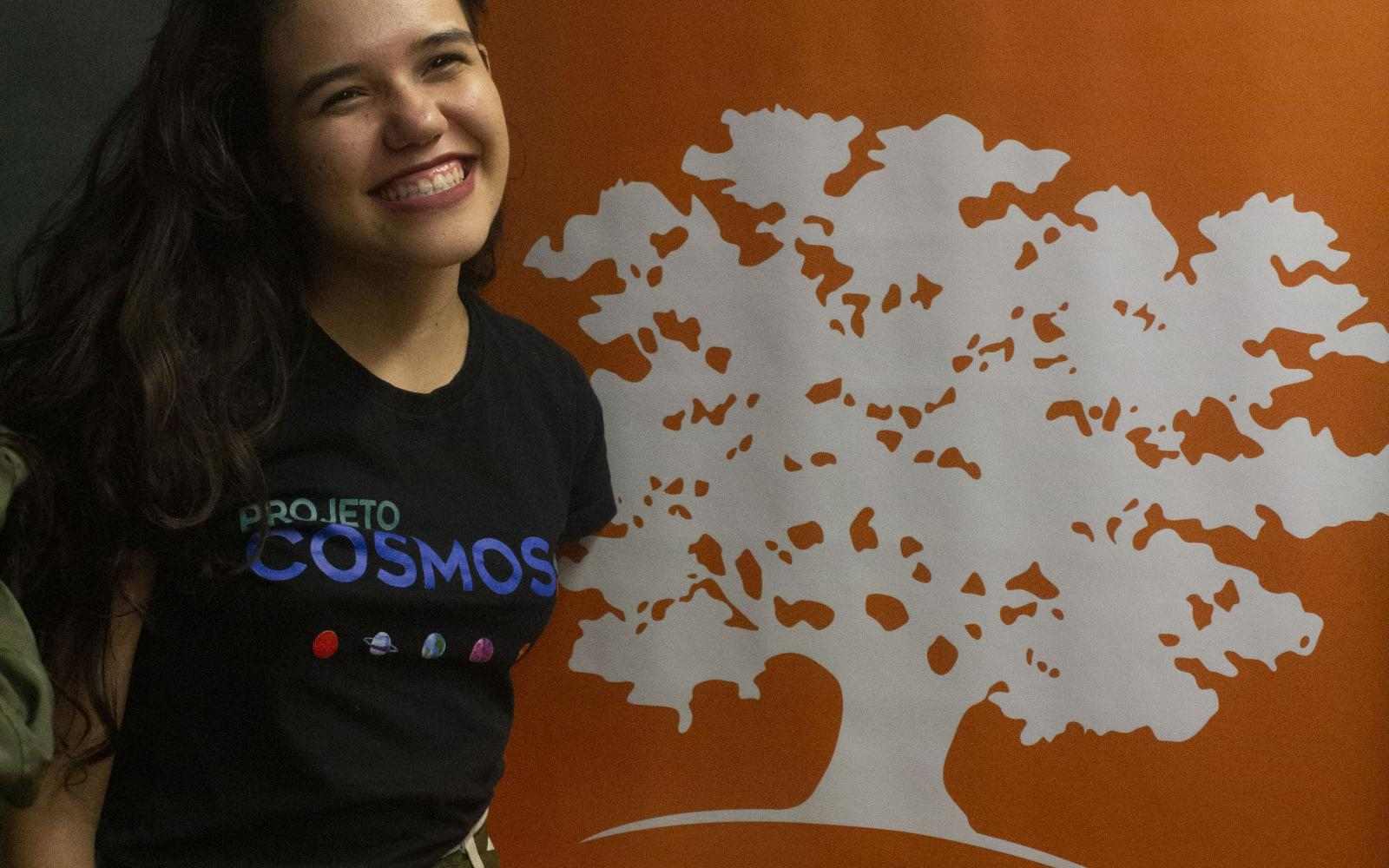 Realizing the precariousness and inequalities inherent in Brazil’s scientific culture, Carlla and her friends created Project Cosmos, a venture that offers a creative learning model for astronomy in public schools. Carlla’s story demonstrates that by identifying a critical problem in Brazilian education and exercising shared leadership, young people have the power to lead a social movement supporting scientific knowledge and reason across Brazil.

Admiring newsstand shelves filled with science magazines from National Geographics to Galileo, Carlla would stare in awe of the covers and story titles even though she could not purchase the magazines. Carlla’s fascination for science grew into a passion for exploration and wonder.

Carlla’s mother, a public school teacher, exposed her to the power of education to transform the world and her future for the better from an early age. Carlla’s mother had Carlla when she was still in college. For years, she would take Carlla to college and bring her to the library since she did not have any childcare. Through immersing herself in books, Carlla embraced self-teaching and self-discovery.

Growing up, Carlla studied in multiple public schools around the city of Manaus. With each move she made with her mom, she witnessed the impact of education inequalities, bothered by the distinctions in opportunities and resources between schools. Many of the schools she attended had libraries with limited hours and even when the libraries would be open, they did not allow students to borrow books. With a little window of time to read, Carlla found it increasingly difficult to discover the world through books.

However, around the age of 16, Carlla transferred to a technical school with the help of a private sponsor. She soon discovered that her school had a robust library, which is where she spent all of her free time.

Her new school also offered a science olympiad, specifically in astronomy and astronautics. Despite her limited scientific training in previous schools, Carlla’s determination trumped her hesitation. Carlla taught herself astronomy and eventually went on to win a bronze medal in the The Brazilian Olympiad of Astronautic Astronomy (OBA).

Through self-teaching, Carlla more thoughtfully questioned the world around her. Astronomy fostered her curiosity for science, opening her mind to new ideas. She saw the value of astronomy, a means to enchant young people and captivate them to be scientific thinkers, and wanted to sustain the benefits beyond the olympiad.

Carlla and four of her peers came together to address this critical deficiency in Brazilian public education - science courses. Carlla believes that not only does “Brazil needs more scientists, but also scientific knowledge is essential for building conscious citizens.” Together, Carlla and her friends co-founded Projecto Cosmos, a social project to teach astronomy in public schools.

Although the focus is on astronomy, Carlla does not expect students in the program to become scientists, but expects all participants to learn how to think scientifically and analytically. Projecto Cosmos’ end goal is for all young people to be conscious, active citizens, by developing their skills in critical observation and questioning, creative problem solving, and evaluating the world around them.

Four years later, Carlla, now 20, finds herself leading something much bigger than herself. Alongside a team of 30 university students from various academic disciplines, by 2019, Project Cosmos reached 1,500 students in 25 local schools. The team’s rotational leadership model enables everyone to take responsibility and lead initiatives, regardless of their academic background.

Last year, Carlla’s team won the Laureate Award for Young Social Entrepreneurs. This year, they published an article about their organization’s methodology in the 2nd Symposium on Space Education Activities and three of their participants medaled in OBA. They also were selected as one of 50 social projects into a program hosted by a nonprofit organization that promotes scientific knowledge through increasing its visibility and impact in Brazil.

Carlla hopes to not only share knowledge about astronomy, but also promote a culture of inquiry and openness to new ideas among young people in Brazil. She believes that all young people need a “proactive attitude of searching for knowledge” in order to think about social problems in their community and imagine youth-driven solutions. Embracing the importance of an Everyone a Changemaker world in her own community, Carlla says our rapidly changing world needs “people who fight and want a better and fairer Brazil for all.”