Andreas is Chief Investment Officer of Argenthal Private Capital Limited, an investment and advisory firm focused exclusively on the private funds industry. Prior to his position at Argenthal Andreas co-founded a financial services firm in the area of asset management, investment banking and product distribution. In this capacity, he focussed on building the asset management division Altira AG, an independent asset management platform whose business was to found, buy and build asset management boutiques. Andreas pioneered the development of a select number of investment strategies in private and public markets. During his tenure with Altira AG, the company grew its asset under management to 1bn US$. Andreas began his professional career in 1999 in the M&A practice at Lazard Ltd. He graduated with distinction from the University of Bayreuth, Germany, where he received his MBA. In the area of social finance, Andreas is passionate about finding ways to scale social enterprises. As a member of the ashoka support network (ASN), he is engaged in mentoring fellows, in particular in the area of finance and strategy.

Arthur Getz Escudero has engaged over three decades in participatory action research, policy advocacy, and program design in multiple cultural contexts. He is on staff with several international environmental NGOs (The Nature Conservancy and World Resources Institute), managing projects on agro-biodiversity, biosafety, and sustainable development governance and he is also a consultant for Humane Society, Ford Foundation, IFAD, and FAO on UN system engagement with civil society on sustainable agriculture and rural development initiatives. As a policy director for Heifer International, Arthur promoted policy reform to combat hunger and advance community–led development strategies and sustainable livestock livelihoods. He is the Co­coordinator of a community of practice on urban food strategies, under a EU Framework 7 project involving policy makers, scientists and practitioners in knowledge brokerage about sustainable production and consumption in food systems. As a President’s Scholar at the Cardiff University School of Planning and Geography (UK), he is currently researching urban-rural linkages, adaptive governance and food systems resilience – with a focus on the Nairobi urban region.

Dick is a Senior SCP Expert at the Collaborating Centre on Sustainable Consumption and Production (CSCP). At the CSCP, he is leading various international projects and initiatives, including the Business Innovation for Sustainable Scale-up (BISS) Project. The objective of the BISS project is to identify and assess innovative business models and success factors for scaling up their impacts on sustainable living. The project provides the building blocks for the newly formed Global Network of Sustainable Innovation and Entrepreneurship. Dick is passionate about working with entrepreneurs, industries and businesses to scale up their innovations and impacts. Dick has 14 years work experience in sustainable business development, eco-innovation, cleaner production, industrial ecology, strategic waste management, and environmental management in various sectors (e.g. resource and food processing, manufacturing, service, local and state government, SMEs). He has work experience in Australia, South Africa, Germany, Netherlands, USA, New Zealand, Pakistan, Thailand, Kenya, Japan, and Colombia.

When Mwalimu Musheshe was a university student during the eighties, he was active in opposing the existing regime, for which he was tortured and imprisoned for a year. In 1984, he began working for the Uganda Food and Peace Project. Over the last decade, he has changed how academics, policy makers, and business people approach rural development issues in Uganda. Musheshe was the chairman of Uganda’s National Agricultural Advisory Services (Naads) board of directors. A Senior Ashoka Fellow, he serves on the boards of national development associations, and is one of the few people who continuously challenge policy makers to think outside the box in introducing effective measures to combat rural poverty in Uganda.

Georg co-founded Forest Carbon Group in 2009, one of Europe’s leading forest carbon and ecosystem investors. Today he serves the company as its COO/CFO. Georg’s relevant carbon market experience ranges back to 2000 when he co-founded the first German Emissions Trading Expert Group. He has been working on various aspects of emerging carbon markets ever since, first for Deutsche Börse, then for Deutsche Bank and finally as a consultant at BCC. He has been specializing on forest carbon since 2007 when he started a project in the framework of the Packard Foundations’ Tropical Forest Carbon Strategy and has workedmarkets-related biodiversity and capital markets related aspects of forest carbon for German Blue Chip Companies and Germany’s Federal Office for the Environment. Since its foundation Forest Carbon Group has invested more than 10m USD into ecosystem and forest rehabilitation and conservation projects with high social impact. Most notably into the Mai Ndombe REDD+ project in the Democratic Republic of Congo, one of the biggest of such projects worldwide.

John helped set up Fambidzanai, the first ecological agriculture centre in Zimbabwe, in 1988. His passion has always been to link methods and practices towards ecological agriculture (linked to community development) spreading far and wide. To this end, he played a leading part in setting up the PELUM Association across east and southern Africa and also a Schools programme in Zimbabwe that is now also working regionally. More recently he has been helping many ecological agriculture organisations in the region think and plan strategically. He is now helping set up a Food Movement in Zimbabwe, and a new award for ‘farm and food innovators’, as well as continuing to work with a range of organisations in a strategic way.

Karla Canavan has 20 years’ experience in identifying opportunities in new and emerging markets and developing and implementing strategies to successfully pursue them. She began her career in the Banking sector in Mexico as a fixed income and derivatives trader at Banco Santander, where she also managed marketing. From there she moved to Cargill where she coordinated logistics, pricing and marketing for local crops. Over ten years ago, Karla brought her experience to Bunge where she began by developing the food products line for Latin America, providing her with the understanding of the processing piece of the value chain. Karla then moved to Bunge Environmental Markets in 2007, where she led the effort on consulting services for carbon and sustainability. While responsible for Latin America, Karla reviewed the investment potential and implemented over 100 different carbon projects across different sectors and methodologies. She is currently Commercial Director for the Western geographies, Including Europe, The Americas and Africa.

Lothar Jakab initiated and co-founded Steinbeis Consulting for Impact Investing, an investment advisory company in impact investing where he co-managed four technology transfer funds. Since 2007, he has been a Board member (and since 2009 Chairman) of Primus Valor AG, Mannheim, an issuer of closed-end funds for real estate and renewable energies investments. He has five years of experience in mergers & acquisitions and another five in investment management, corporate finance and corporate controlling. In total, Lothar has more than ten years of consulting activities in strategic planning and business development in various sectors, e.g. health, pharmaceuticals, energy, financial services, IT and wholesale/retail. He has eight years of consulting experience in the African context and five years of experience in organisational development and business process reengineering. In addition, he is the initiator and Managing Director of Elisa e.V., Frankfurt am Main, a charity active in supporting projects the field of education and health for developing countries and an Ashoka advisor since 2012.

Myrtille Danse is the Executive Director of the BoP Innovation Center. Myrtille is an internationally recognized expert on the intersection of business strategy and sustainable poverty alleviation. She facilitates the design of enterprise strategies and poverty alleviation approaches for low-income markets, developing capabilities of new market entry, building cross sector collaborations, and evaluating the sustainability impact of business ventures. She has almost 20 years of experience on value chain development and inclusive business strategies with Multi National Enterprises and local private sector in transition and developing economies. This experience was obtained as a project leader of numerous international business development projects in Europe, Africa, South East-Asia and Latin America. Her experience as a private sector advisor, including more than 8 years in Central America- policy advisor and trade attaché of the Dutch Ministry of Foreign Affairs, and advisor on local private sector development for an international NGO on development cooperation, enables her to mediate between the private sector and vital societal actors required to develop successful pro-poor market-based innovations.

Nikolai Fuchs serves since three years as President and General Manager of Nexus Foundation, Geneva. Before he had a nine year stint of being head of the agricultural faculty at the Goetheanum Academy, Switzerland, in parallel heading the Demeter International Office in Brussels. Adjacent to this he was General Manager of the Biodynamic Association, Germany and before that advisor to Demeter farms in Northrhine Westfalia. He has served as well as head of the Nature Center Eifel, an environmental education station. He is a trained farmer and holds a diploma in agricultural sciences of the University Bonn.

Reinhard studied business economics and worked as a manager for a pharmaceutics company , two great clinic companies and for a company in the international music business. Since 1988, he has been self-employed as a consultant franchising issues. So far, he has worked for nearly 300 franchisors and more than 1.000 franchisees and gathered experience in managing franchise systems and the handling of equity capital. Reinhard also developed several relevant innovations for the franchise market – for example the “Franchise Management” job profile or a method to evaluate the capacities of a franchise system. Since 2008, he has been the majority shareholder and CEO of Global Franchise AG, a company that besides the usual consulting additionally offers the shareholding on compelling franchise concepts. Reinhard is a member of the International Franchise Laywers Association (IFLA), active in 40 countries around the world, the German Business Angels Network (BAND) and some other alliances.

Ursula is a food researcher and consultant, author, translator of books on food and/or wine. She lives and works in the UK and in Germany and her main areas of work are food literacy, food culture and cultures, localised food systems. She is a Board member of Slow Food Germany (since February 2010), Chair/president of Slow Food Germany (since April 2011) and Member of the Executive Board of Slow Food International (since October 2012). Her work revolves around the development of strategies and policies for Slow Food in Germany and other countries, as well as contributing to governmental advisory boards, nationally and also on EU level. Her key topic is changing the food system to a better and fairer one. Between 1988-2004 she has worked as a researcher at the University of Munich and as a lecturer at the Universities of Bayreuth (Germany), of Oxford and Cambridge (UK). 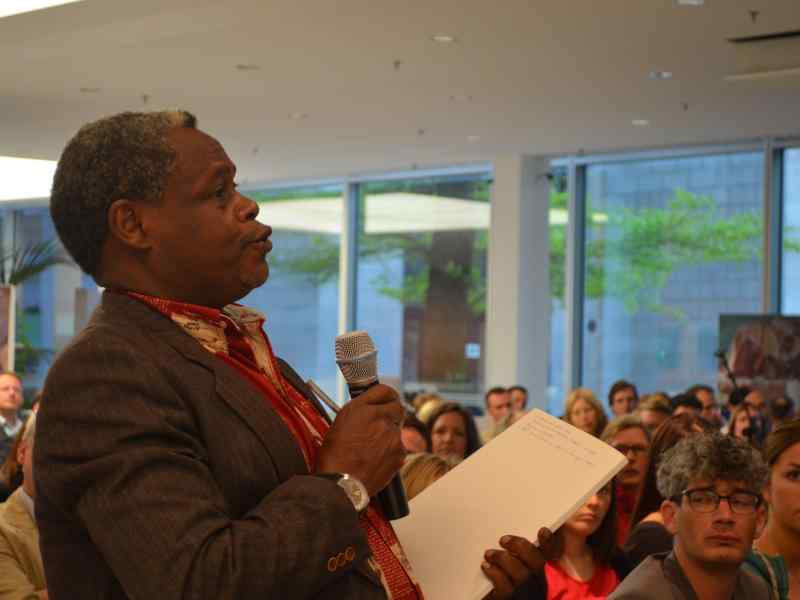 2013 Globalizer: Nutrients for All