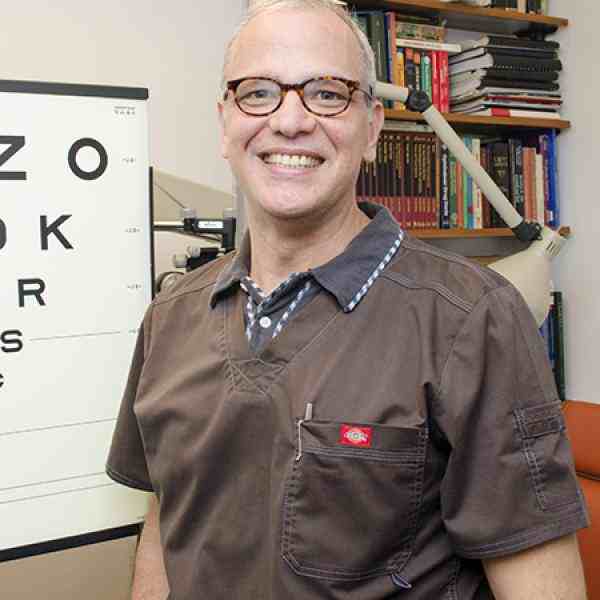 With a dynamic, simple and effective program, Martín Guzmán is extending universal access to visual healthcare across Venezuela. Acting as a catalyst, Martín is bringing together community, state institutions, and citizen sector actors, to work toward visual health for all, and to ensure their full participation in the academic and labor fields.

In Venezuela, the traditional medical system has collapsed and has been replaced by a faltering state system, Martín ensures that every citizen has access to high-quality visual healthcare. Founded on the principle that such attention is essential to enable people, especially children, to participate as productive members of society, his citizen organization (CO), Lumen, awakens a widespread demand for visual care in remote and isolated communities. Rather than building a parallel system, Martín acts as a catalyst to integrate schools, the optometry profession, public sector agencies, and the public behind his initiative. By demonstrating that better visual care is a simple and effective means to improve performance in school and the workplace, Martín galvanizes the entire citizenry to participate in and promote his program.

Martín begins with the schoolteachers who have an influential role in the lives of the local community. With a model that requires few external resources and little cost, the teachers undergo a simple training to administer an eye exam to their students. After conducting the exam, children with diagnosed need are referred to specialists for corrective eyewear or specialized attention. This can all be done over the course of a few hours, and the children quickly show improved performance. The teachers become advocates for Lumen and start to spread the program around the community. Rather than teaching others to do the test, the teachers perform it on members of the community and school children every year. As the impact multiplies, people are empowered to not only take charge of the visual health of their families but also in their community.

For the 20 percent of children tested to have reading difficulties, Martín provides eyeglasses through volunteer optometrists and lens through the manufacturers as a way for them to comply with government-mandated corporate social responsibility programs. For those needing access to ophthalmologists and surgeries, Martín persuaded leading regional hospitals to provide them for free.

Once people become champions of Lumen, they pressure the municipal government and public health agencies to adopt its mechanisms into public policy. Martín hopes such popular advocacy will become the norm in other communities where Lumen operates, and for its program to ignite a transformation in Venezuelan healthcare policy at municipal, state and national levels in favor of comprehensive visual care.

A failure of basic healthcare, poor visual health contributes to an unrelenting cycle of poverty. Visual perception is the principle means through which children learn and absorb information, and those who cannot see well suffer in school and the workplace simply because they cannot read clearly. One in four children suffer from some vision-related problem that can interfere with their learning. Unfortunately, in Venezuela the general population does not seem to recognize the importance of visual health to one’s overall wellness, considering only serious ocular conditions such as blindness—and individuals with these conditions are isolated as a result. Poor eyesight more generally affects a larger number of people, but only about 30 percent of children receive regular eye exams.

Despite being a relatively easy problem to fix, poor visual health does not receive the attention it needs from communities, above all in rural areas. Venezuelan communities demand public medical services to address more widely recognized maladies such as malaria. They ignore visual health and its high correlation to poverty or consider it a privilege available only to the elite. Transportation in these areas can be unreliable and expensive, and roads are in bad shape or do not exist, all of which makes it difficult to gain access to visual care. This has contributed to the idea that visual health is a luxury.

The Venezuelan public health sector has directed some energy toward this issue, but the system it has constructed does not suffice. Seriously underfunded, the government’s strategy centers around a welfare approach that distributes thousands of pairs of glasses through a series of 2,700 federally-built local clinics around the country. These clinics, however, are not equipped with the resources to furnish adults and children with preliminary eye exams or support the work of optometrists. The Miracle Mission program offers only selected surgery to the most severe cases, and its reliance on foreign medical doctors renders it unsustainable. The health system promoted by the state consists of more isolated silos that makes an integrated visual health solution with Venezuelan eye professionals nearly impossible.

As a professional optometrist, Martín has made visual healthcare not only a priority for communities, but also a simple, accessible, and enabling experience. Recognizing the influential role that teachers have with children and communities, he recruited them as his primary ambassadors. Martín started in the schools of the most vulnerable and rural communities in the state of Anzoátegui, with a captive audience of teachers. Lumen supplies teachers with a straightforward training and visual diagnosis kit, including a low-cost eye chart, developed by Martín and his team. This eye chart is easy to administer and uses circular shapes rather than letters as in traditional exams, rendering it readable for all ages and illiterate children. With the help of a few interns, students or optometrists, Lumen trains teachers to successfully administer the exams in their classes and become Primary Agents for Visual Prevention. Over the course of three days, teachers learn to diagnose visual problems and provide specialized, empathetic attention to the children they identify with challenges. During its pilot in 2009, teachers performed 600 exams in just one day.

Once teachers identify students in need of additional care, they refer them to optometrists during the same sitting. Martín has established relationships with optometric laboratories that donate glasses to Lumen as a corporate social responsibility (CSR) strategy. They also send trained professionals and optometry students to the schools to perform more sophisticated tests on the students after they undergo their initial exams with their teachers. In some cases the optometrists will invite the children to more tests off-site and fit them with special eyewear, providing them with personalized attention they would never have had. In convincing the optometrists to partner with Lumen, Martín has guaranteed the participation of a crucial technical group that other similar programs, including the governments, have not managed to achieve.

Within just a few months, enthusiasm for Lumen’s work spread rapidly throughout the communities where the schools were located. Martín can demonstrate clear and immediate impact with measurable academic improvements among the students after Lumen’s intervention—by enabling them to see more clearly. Observing this achievement, the children’s parents and other community members grasp the importance of visual health and simplicity in preserving it. They clamor to learn more about Lumen’s methods, and teachers train them to administer the exams to one another. Not only do adults begin to request corrective eyewear, their commitment to visual health produces a critical mass that persuades municipal officials to sanction Lumen’s trainings as a norm for teachers in the local public schools and to use local resources to provide more exams.

The key to Lumen’s success lies in its simplicity and cost-effectiveness. Martín only has to convince a few optometrists and labs to contribute time and resources to the communities, a strategy that they can use for their own marketing purposes. With such simple techniques and obvious results, teachers and school administrators welcome the opportunity to implement the Lumen tests in their classrooms. This quickly sparks a groundswell of demand for the program throughout the entire community.

Martín is establishing partnerships with the private and social sectors to secure medical and financial resources to expand Lumen’s impact. Obligated by the government to enact aggressive CSR initiatives, large corporations have been especially keen to invest in Lumen, due to the clear impact and potential for national scale it has demonstrated. Martín has received support from Total Oil and Gas and is negotiating with other petroleum companies as well, all large actors in Venezuela. Martín is also leveraging the resources and contacts of other COs working in similar fields, such as one with a nationally recognized telemedicine program. He also hopes to collaborate with the Latin American Association of Optometry and Optics to launch Lumen regionally. Martín has also begun to make inroads with Fe y Alegría, a network of renowned low-cost Catholic private schools all over Latin America, to supplement his strategy of implementing in public schools.

With the support of Martín’s networks and the mounting demand for visual healthcare Lumen helped ignite, he believes the public health sector will suffer a “crisis of supply,” insufficient to meet the demand. Martín focuses on giving communities the tools to pressure the state and federal public health institutions to expand access to improved visual health throughout Venezuela. Lumen would spearhead a transformation of the public health sector through its example. He envisions that the Ministries of Health and Education will start to adopt some of Lumen’s exam strategies as protocol for the school system, much like the mayor’s office did in the pilot. Part of a teacher’s job would entail performing such exams. The Health Ministry would assume its role of providing services needing care, while Martín and the Lumen network of private optometrists and ophthalmologists will provide glasses, surgery and general support. Martín sees this strategy as viable, as government ministries have shown interest in collaborating for fear that they might lose their position as the primary visual healthcare provider.

Martín’s love for mountain climbing has led him to live by the mantra “to stop falling means to stop trying.” Martín has always sought opportunities to try new initiatives, and he sees obstacles or problems as opportunities to experiment. He also describes himself as absolutely dissatisfied with his surroundings and with a social and economic model that he perceives as structurally unjust. This has moved him to find ways to contribute to society using his professional skills beyond his private practice. This is a particularly noteworthy and challenging task, given his profession as an optometrist, an otherwise technical discipline, does not require empathy or social conscience.

Martín fell into optometry almost by chance. Enjoying the career but desiring to embrace a more service-oriented component, he pursued a master’s degree in Health Services Management at Andrés Bello Catholic University. Despite the university administration’s insistence that the field of optometry did not qualify Martín for this particular graduate course, he doggedly persuaded the officials to admit him. Eventually, they allowed Martín to complete all coursework, but without the right to earn the actual degree. For Martín, the learning mattered far more than the degree, and he was exposed to many different perspectives and mentors. Martín also came to understand the importance of laying networks to accomplish large social impact. He started to identify himself as an agent of social change and piece together his technical skills with his vision for an improved society. The idea of Lumen took root, and after percolating for a few years while he worked as an optometrist, Martín launched the project in 2009. Martín believes every person has the right to clear vision and to learn and work free of pain.