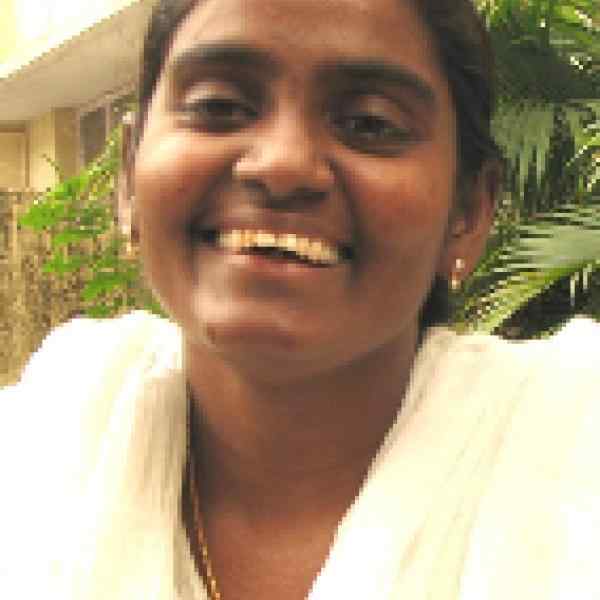 Kousalya Periasamy is a pioneer: the first woman in India to declare she is HIV-positive. She has brought attention to the fact that the average Indian housewife is at risk of infection. Through the Positive Women Network, she is creating a network of support systems for women living with HIV and Aids in India.

Kousalya is working to end the stigma and discrimination in India against HIV-positive women in all social spheres. Most of the HIV and Aids programs in the country have focused on prevention rather than treatment and rehabilitation. These programs have primarily targeted high risk segments of society, such as commercial sex workers and truck drivers. Kousalya is using a rights-based approach to highlight the fact that millions of other women, young people, and children are at risk as well.She is reaching out to women living with HIV and Aids by creating a nationwide grassroots network that enables HIV-positive women to advance their cause in a unified way. It is a unique example in India of the transformation of grassroots leadership into a national resource that contributes to the medical, social and legislative responses to HIV at the community, state, and national levels.The Positive Women Network works on several fronts. It lobbies to improve how information on HIV and Aids is delivered to women. It also works to improve access to services by providing counseling, treatment, general health services, and drug rehabilitation. The Network is helping to push for affirmative action for infected women in the forms of employment, vocational training, and credit. It is working to ensure access to quality education and health care for children affected by HIV-positive parents.In 1998, the Network started up with just four founding members, mostly from Tamil Nadu. In 2002, it organized the first National Consultation on women living with HIV and Aids, transforming it into a national network. In 2006, it had more than 5,000 members, with firmly established units in Karnataka, Kerala, Andhra Pradesh, Maharashtra, Gujarat, Manipur, West Bengal, Assam and Orissa.

There are millions of women and children at risk of HIV and Aids in India today. The risk factors are compounded by the government’s misguided message that “if you are married and remain faithful to your husband, you will not get Aids.” The recent testimonies of a large number of PWN+ women, led by Kousalya, prove otherwise. Married to men who were HIV-positive and who, knowingly or not, infected their wives with HIV, many of these women are now widows. They are doubly stigmatized and ostracized by their communities when their status is revealed. The country’s primary Aids control body, the National Aids Control Organization (NACO) has refused for a long time to acknowledge that the deadly HIV and Aids issue affects the entire society.A UNAIDS Epidemic Update states that the Aids epidemic is affecting women and girls in increasing numbers. According to the update, the HIV epidemic in India is, in fact, very diverse. There were about 5.1 million HIV-positive persons in India in 2003. Serious epidemics are under way in several states. In Tamil Nadu, HIV prevalence of 50 percent has been found among sex workers, while in Andhra Pradesh, Karnataka, Maharashtra and Nagaland, HIV prevalence has crossed the one percent mark among pregnant women. In Manipur, HIV prevalence measured at antenatal clinics in Imphal and Churachand has risen from below 1 percent to over 5 percent, with many women testing positive appearing to be sexual partners of male drug injectors.Women living with Aids are increasingly forced to shoulder the burden of caring for and supporting impoverished families deprived of the male earner. Women often find that they are ill equipped to face these challenges in the absence of social safety nets. The lack of information on health services and legal rights plays an important role in marginalizing women’s concerns. Most women remain unaware of government services and schemes. The associated stigma and the absence of proper counseling, treatment and medication discourage HIV-positive women from seeking the health services that do exist. Most health services are not women-friendly and the discriminatory attitude of health providers and medical staff toward women generally act as major deterrents to accessing services. Service delivery in rural areas is even worse.With the launch of the Mother-to-Child Transmission Prevention program in the country, all pregnant women are tested for HIV in both government and private hospitals. However, many are tested without informed consent and they receive almost no information or counseling. In case infection is detected, many hospitals discriminate against these women, turning them away from access to care. Some government hospitals have the testing programs available and women may be referred there. Unfortunately, many women do not know their status or the reasons they are being referred to these hospitals. Moreover, pediatric care for HIV, including Anti-Retroviral drugs, is not available. In fact, only two or three doctors have been trained in specialized pediatric ARV delivery in all of India.The Indian government continues to emphasize prevention over treatment. Only a very small number of HIV-positive people receive ARV therapy. NACO currently does not plan to expand access to ARVs, except for the prevention of mother-to-child HIV transmission. Even if a quarter of the money spent on prevention had been utilized carefully for providing care, the situation would not have worsened as much. In the end, stigma and discrimination appear on the top of the list of problems. Women face harassment and violence within and outside the family. Humiliation in both marital and natal homes and the lack of a programmatic response from the state has driven many women to destitution. Outside the family, many communities are hesitant to let HIV-positive women rent or use community property, even for performing last rites. These women struggle to care for their children and provide them with treatment in the event that they contract the disease as well.A study conducted by Positive Women’s Network identified six major concerns of HIV-positive women that need to be placed within a human rights discourse: health care and treatment (the main concerns were mandatory testing without consent, abortion without adequate counseling and lack of resources to access treatment); property succession and inheritance within natal and marital homes; access to reproductive rights and health; livelihood opportunities; decision-making powers; and access to state-sponsored benefits.

&quot;In prevention, there is a lot of information out there. But for care, there is no information at all,&quot; says Kousalya. “I’m an HIV-positive person. Where can I go? Where can I get treatment? There is no information, nothing. Voluntary testing facilities are there, but that is used only for prevention.&quot; It is this basic flaw in the system that spurred Kousalya, only 20 years old at the time, to set up the Positive Women’s Network.Having lost her mother at the age of two, Kousalya spent her childhood shuttling between the homes of her grandmother and stepmother, in the small town of Namakkal in South India. She was married off to a cousin soon after completing secondary school. Forty-five days later, her husband was dead and the cause of his death was kept a secret from the young bride. She was subsequently driven out of her marital home. When she herself fell ill, she went to a clinic, where a staff person revealed knowledge of Kousalya’s husband’s case and the reason for his death. Kousalya’s diagnosis was no surprise to the clinic staff. Filled with anger and outrage at how her family had treated her, Kousalya took the brave step of filing a case with the local police. Ignorant of the stigma attached to HIV and Aids or the seriousness of the illness, Kousalya went public with her story in 1995, becoming the first woman in the country to come out openly with her status.Her story made national headlines, which Kousalya considers a blessing in disguise, and she came in contact with several citizen organizations working on the disease. This interaction opened up an entirely new world for Kousalya. Armed with information on the disease, she started work in a private hospital as a counselor and began to put together the elements of a model that could break through personal and institutional roadblocks. She saw that, rather than starting one more stove-piped interest group, she needed to help women with HIV and Aids become mainstreamed within the larger health, women’s and HIV-positive movements so that they could have a chance to improve their lives and that of their children. Along the way, the Tamil-speaking young woman taught herself English in order to connect with national and international players and policy makers. Her first encounter with NACO officials set the stage for her take-off. Their refusal to accept her argument that average citizens are at a huge risk for HIV and Aids led to the setting up of the Positive Women’s Network in 1998.