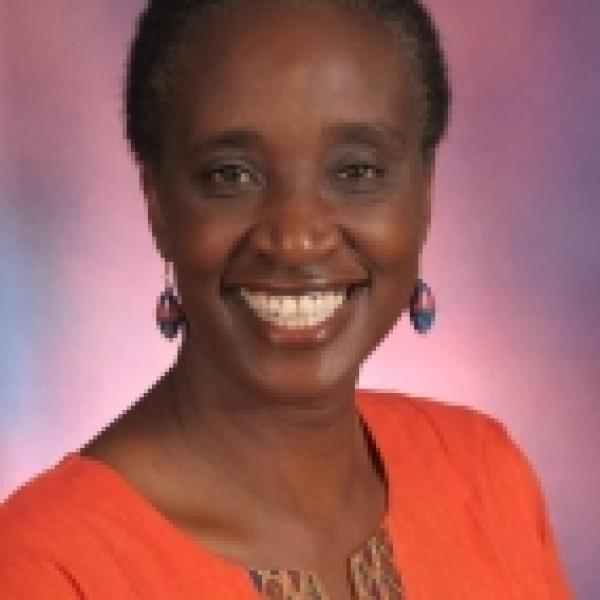 About 71 percent of Kenya’s urban population lives in overcrowded slums on the periphery of major cities. These slum dwellers face poor and unhygienic living conditions and are frequently threatened with forced eviction. Jane Weru is working to organize these slum dwellers and empower them with the technical and financial resources needed to prevent eviction and improve their living conditions.

Jane has become an organizer and spokesperson for Kenya’s slum dwellers—a population that faces a history of negative stereotypes, poor living conditions, and limited opportunities—and has created the organizational infrastructure and tools needed to empower them to break out of an unrelenting cycle of poor living conditions, forced eviction, and poverty.

Jane is formalizing the slum dwellers efforts to prevent eviction and upgrade the slum infrastructure and improve living conditions. She has also created a network that supports these efforts by providing technical expertise and assistance with regard to land tenure and eviction negotiations; savings and credit management; construction design and planning; and mapping and enumeration. Some of the tools created by this network have gone on to be used by the government in other projects. Jane is also unlocking creative financial solutions to finance these community-led slum upgrading initiatives and disproving the commonly held belief that slum dwellers are risky debtors. Lastly, she is leveraging commonly held moral and religious beliefs in Kenya to make the challenge of housing for the urban poor a concern for all Kenyan citizens.

In spite of rapid urban population growth, the Kenyan government has failed to meet the acute need for land settlement. As a result, the number and size of informal settlements around Kenya’s urban centers have ballooned, with millions living in high-density slums without basic infrastructure, access to financial services or secure land tenure. The origins of these slums can be traced back to Kenyan independence, when travel restrictions on natives to urban areas were lifted. The allure of employment opportunities and the promise of a new and better life in the city drove an unprecedented wave of rural-urban migration. The government’s land adjudication efforts to accommodate its landless citizens did not meet the demand for urban settlement. This led to the formation of informal settlements, which have grown into the slums scattered all over Kenya today.

The urban population and size of slums continue to grow—Nairobi’s population (a mere 1.2 million in 1948) has risen from three to four million people since 1999. 60 percent of these four million people live in slums that cover only 1.5 percent of Nairobi’s land. Kibera, the largest slum in Kenya, has a household concentration of over 250 per hectare and is home to an estimated population of half a million people (growing rapidly at 6 percent per annum). In addition to increasing size and density, slums lack infrastructure and basic services, such as sanitation, electricity, and water. An estimated 94 percent of all slum dwellers do not have access to toilets or fresh water; and the child mortality rate is 150 out of every 1,000 (15 percent, compared to 0.6 percent for Nairobi as a whole). It is no surprise that the lack of basic infrastructure and services has led to disease, crime, and social unrest—factors that define the negative perception that most people have of slums today.

Despite their size, slums are not recognized as residential areas and are almost universally represented as unoccupied land on maps of urban centers. People cram into these marginal lands with little effort by government to plan or provide services for them. Additionally, without secure and recognized land tenure, slum dwellers are extremely vulnerable to eviction. The increasing number of evictions from informally occupied land, has resulted in increasing poverty, homelessness, and desperation. If left unchecked, this could result in civil unrest of epic proportions. The potentially far-reaching effects of this issue make it—and the need for solutions to it—the responsibility of all Kenyans. The attitudes of financial institutions (that brand slum dwellers as risky) and society (which perceives them as dangerous) must change because slum settlements, according to Jane, are inextricably tied to urbanization and represent one of the most important challenges of modern day society.

Jane established Muungano wa Wanavijiji (meaning, Slum Dwellers Federation) to unify and formalize slum dwellers efforts to prevent eviction. While working as a legal aid officer at Kituo Cha Sheria (a legal aid service for victims of forceful eviction), Jane quickly realized that resolving cases after eviction was not enough. Something had to be done to prevent the evictions from happening in the first place. Although slum dwellers tried to resist evictions by uprooting construction material put in place by contractors (employed by private landowners), their actions were haphazard and mostly ineffective. She realized then, that such actions could gain legitimacy, command respect and deliver better results if slum dwellers where organized into a formal institution. In collaboration with the church and other civil society organizations, she united the slum dwellers into savings groups under one federation. The Federation—which would later grow into a movement of more than 60,000 members from slums in eleven districts around Kenya—was able to retain possession of all slum settlements that were facing eviction and whose court cases Kituo Cha Sheria had lost.

Jane has also found a way to access the technical expertise needed to improve the living conditions in slums. It became obvious to Jane that technical support was needed as Federation members began thinking beyond securing land tenure to slum upgrading. In response to this need, Jane created the Pamoja Trust, a non-profit support agency for the Kenya Slum Dwellers Federation. The Trust is a network of professionals that includes architects, urban planners, engineers, lawyers, advocates, and accountants. Its mandate is to provide technical support and advice to the Federation in relation to negotiations with government and private landowners; mapping and enumeration; slum upgrading; and financial education. For example, the Trust (on behalf of the Federation) negotiated with the government for US$2 million toward the relocation and upgrade of over 20,000 Kibera households that were facing eviction. The trust developed the satellite mapping and enumeration tools that were used in the project. The government has adopted these tools for use in similar exercises in the future.

As the work of the Federation and Pamoja Trust continued to grow, so too did the aspirations of the slum dwellers, but without financing beyond their savings, they were not in a position to meaningfully improve their living conditions. Banks, the primary source of financing for real estate development, saw this group as risky and would not touch it. It became increasingly apparent to Jane that a creative solution was needed and in 2010, she started Akiba Mashinani Trust—a non-profit financial facility for the Kenya Slum Dwellers Federation. Akiba Mashinani is committed to strengthening the capacity of slum dwellers’ savings groups toward the attainment of improved housing. It is also the only financial institution in Kenya providing slum dwellers with financing for real estate development. Despite the need for such an organization, Jane faced nearly insurmountable resistance from every bank she approached for a loan to finance Akiba Mashinani. She realized that she would have to find an alternative solution to capitalize her new endeavor. Jane partnered with a leading local development bank to set-up a profit-making real estate project, the profits from which would be ploughed back into Akiba Mashinani. This financing arm is called Makao Mashinani. Jane was soon approached by a group of 2,000 slum dwellers for a construction loan of US$1 million, which they paid back in one year through their group savings. This completely dispels the common belief that slum dwellers are a risky demographic, which is held by traditional financial institutions. Jane continues to seek alternative financing options for Akiba Mashinani and is currently in talks with the government to convince them to create a housing fund for the urban poor. This, she believes will enable her to bring her interest rate down from 10 percent to between 1 and 3 percent (compared to traditional banks and even MFIs which currently charge interest rates of at least 18 percent).

Jane prepared a special project to take advantage of the 49th Anniversary of Kenya as an independent nation, which took place on the 12th December 2012. The next seven years hold a biblical significance according to Leviticus 25: 8-13, which says that the 49th year heralds a time where land will be released to the poor. Kenya’s population is predominantly Christian—a fact that Jane is leveraging to make the challenge of urban slums a concern for all Kenyans. She is using the media and the church to run a national campaign targeted at the common citizen, private landowners, businesses, the government, and all Kenyans, appealing to them to act in accordance with these biblical principles (generally accepted by most Kenyans) and release their hold over land occupied by slum dwellers so as to accord them security of land tenure. The focus for this campaign starts in Mukuru Kwa Njenga, a slum that is home to some 200,000 people, just 10 km outside of Nairobi. The focus on Mukuru is part of a bid to save over 50,000 households that face forced eviction by speculative private landowners who are looking to profit from the astronomical returns that this land could generate.

Jane was born and raised in a small Kenyan town called Karatina as the second born of ten children. Her parents eked out a living by running a wholesale shop, which also served as a training ground for Jane and her siblings. It was drummed into all ten children that the wholesale shop was the responsibility of the entire family and that everybody had the obligation to ensure that it succeeded. Therefore, between school terms, Jane and her siblings would take turns managing the till and other aspects of the business.

When she graduated from the University of Nairobi with a law degree, Jane started her career in law as an associate in Korogocho a pro bono legal service, during which time, she met a Catholic priest who worked and lived in Korogocho (meaning rubbish) slum during the height of violent demolitions that characterized the 1990s. Jane had never been to a slum and had (like most people) been conditioned to believe that it is a vile and dangerous environment. Against her better judgment, she yielded to repeated requests from the priest that she go to the slum and provide legal aid to members of his church.

Jane was not prepared for what she found in the slum. People were being forcefully evicted and rendered homeless by ruthless private landowners; and the government was doing nothing to help them. The despair and hopelessness she saw moved her deeply to the point that she started joining slum dwellers on overnight vigils to lend emotional support to victims of forced eviction. She saw the evicted occupants of demolished households try to fight back by uprooting construction poles planted by contractors. Jane became so invested that she left her job to join another legal aid center called Kituo Cha Sheria, which provided legal support to victims of forced evictions. She started as a legal aid officer in 1994, and was appointed Chief Executive in 1995. The years between 1995 and 1998 were characterized by violent and indiscriminate demolitions, forced evictions, petrol bombs being thrown into her office, and numerous court cases filed by Kituo Cha Sheria on behalf of victims. The court system fronted the notion that private land was sacrosanct and that land titles, many of which had been issued irregularly, could not be revoked once issued. Kituo Cha Sheria consequently lost all of its cases.

This is when Jane realized that the problem was a lot bigger than what Kituo Cha Sheria alone could handle. There was need for more to be done and thus, Jane embarked on her 17-year journey to transform the face of slums and stand with Kenya’s slum dwellers to restore their dignity and housing.