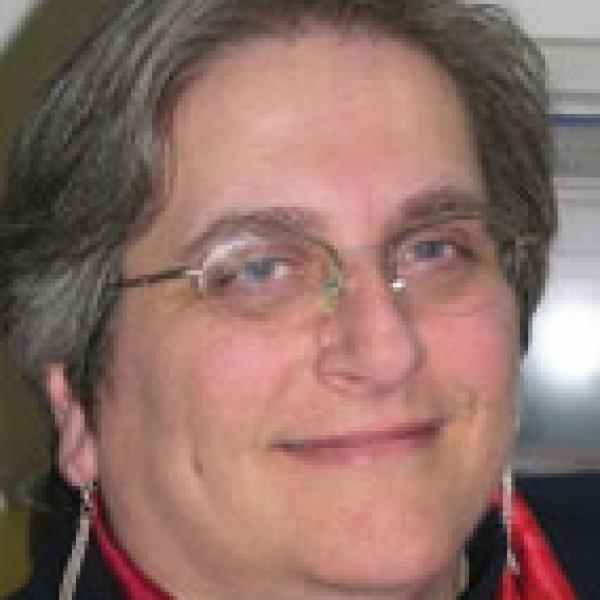 Palestine
MaDad for Childhood Programs Co. Ltd.
Ashoka commemorates and celebrates the life and work of this deceased Ashoka Fellow.

Jacqueline Sfeir is transforming the predominantly hierarchical educational system of Palestine and the larger Arab World into a system that promotes interaction, critical thinking, and community involvement in all aspects of the learning process. Jacqueline believes the system must be changed to accommodate the innate nature of the child as learner. She is shifting the process of education away from the mode of aNaql (transmission of knowledge) to al-‘aql (rational thinking and production of knowledge).

Jacqueline is transforming education in the Arab context from a rote-based hierarchical system into a learning-based socially just system. This will change the concept of “school” from a service provider into an agent of development. Jacqueline uses the reflective learning methodology that she has developed over twenty-one years, the Holistic Integrated Approach, to train teachers, parents, children, and the surrounding community to evaluate local processes of learning and reshape them to meet the community’s, and primarily the children’s needs. This approach engages children’s capacity to learn, enhances their critical thinking, and encourages them to take initiative.
Jacqueline’s Holistic Integrated Approach (HIA) is derived from her own experience and the experiences of her colleagues, informed by the basic tenets of the Convention on the Rights of the Child, and based on principles of sound development. Jacqueline has adopted a flexible multifold strategy to reach her goals. Her new citizen organization (CO), MaDad, equips teachers, parents, students, and others, to use HIA through carefully structured Schools Development Processes, changing the educational process at every level: The classroom, the school, the home, and the school’s broader community.

Palestine is a country in conflict, both internally and externally, which has led to the absence of a functioning government or viable state leadership of the education system. Large, external donors play an increasingly significant role in maintaining the overall system and in leading reform initiatives in different sectors. Moreover, continuous instability makes it difficult for schools to function normally.
In this context, reform in education and the educational system becomes difficult and traditional hierarchical modes of teaching and relating to children are perpetuated. Teaching techniques are out of date and unable to cope with contemporary contexts. The educational process in Palestine depends on rote learning. Schools and teachers rigidly convey information without taking into account how children learn best, and ignore the need for formal education to relate to other aspects of their lives. Throughout the intifada, it was often impossible to send children to school due to violence and curfew. When school does resume, there is no classroom acknowledgement about what has taken place; reinforcing the perception that education is divorced from reality.
The present hierarchy in a classroom—the teacher dictates information and the students copy and memorize it—is reflected outside school. It is part of a general attitude of adult leaders towards children and other less powerful members of a community, such as women. Schools and communities fail to recognize that children learn from everything they witness and experience—in and out of the classroom. The impact of power relationships and gender stereotypes in all aspects of life adversely affects children’s learning.

Jacqueline trained teachers for over twenty years during her university career. Using her university research, she developed an overarching vision (the Holistic Integrated Approach) about how children ought to be able to learn and grow, and several strategies (including the Schools Development Process or SDP) to include both schools and communities in training, awareness, reflection, and engagement in children’s learning.
In 2005, Jacqueline left the university after twenty-one years of teaching and established MaDad, which in Arabic means “to extend support” and is an acronym for “Establishment for the Study and Support of Childhood Programs.” The primary mission of MaDad is to promote HIA to education in Palestine and across the Arab region, aiming at sustainable social change in educational processes. HIA is carried out through several strategies, including SDP.
SDP empowers schools and communities to come together in needs assessments and reflection on the state of their children’s education. SDP facilitators train teachers, parents, and all involved in children’s lives to ask what children need to learn, how their relationships with children do or do not help them to learn, and how to continually apply these insights in a process of improvement and reflection. SDP’s sequential process brings together all stakeholders to create an educational philosophy and vision for the school and its community; partnerships between a school and its community; self-evaluations of teachers and administrators; syllabus and curriculum evaluations; and ongoing processes for reflection, adaptation, and professional development.
MaDad emphasizes participatory action research and reflective teaching techniques in which teachers realize how they affect children’s personalities and how to create alternative teaching strategies. Jacqueline has designed a program to set up a core group of MaDad facilitators—the field officers of MaDad—planning, implementing, and evaluating MaDad’s actions in the field and serving as MaDad’s primary source of empirical data. Each facilitator uses the HIA framework and the SDP with several schools at a time, training people in the community to see the local education system as their responsibility and empowering them to improve it.
MaDad facilitators begin with participatory research in communities. The research is often therapeutic for people who have been disempowered by poverty and violence. By asking questions and displaying interest, the facilitators begin to draw out their capacities. Jacqueline and her facilitators have often had communities and schools say, “We will do the change—just come help move us along.” This is an invitation for MaDad to implement its approach, and it is critical MaDad be invited by an eager community for its work to ultimately succeed. MaDad works with the space that a community or school can provide, and then moves forward in keeping with their readiness and comfort levels—this sensitivity is key to empowering a disempowered, traumatized population.
Currently, Jacqueline is adopting a multi-pronged strategy to establish, consolidate, and replicate her idea and methodology.
Jacqueline has been approached by a well respected and established private school to implement her methodology and introduce the practices of her model. Implementing the complete model in a well-reputed school has an impact not only in other schools but also on parents and immediate communities of children. Jacqueline believes that in a small country like Palestine, word of mouth and doing by example are the best strategies for expanding and scaling up. Her facilitators have begun to introduce her approach and process to other schools, and as news of their work spreads, so too do their opportunities to engage more schools.
To improve children’s learning across Palestine, Jacqueline’s efforts cannot rely on government policy or funding. In the absence of a functional and independent educational system, to participate and influence donor-led and donor-financed reform at the highest level is an effective way to influence how the educational system functions and how children learn. MaDad’s trained facilitators spread HIA to communities around the country, who in turn, equip schools and communities to perpetuate their methods. She latches on to major educational initiatives funded by international donors and trains their staff in her methods so they will spread her model when they work with stakeholders she cannot directly reach.
Jacqueline is also involved in discussions with the Palestinian Ministry of Education to explore ways to provide input to the academic development of government schools. Although the 1999 “New Palestinian Curriculum” was primarily concerned with textbook content, Jacqueline’s work will go beyond this; to reform education to reflect the development a child’s mind and self-image.
Jacqueline also works with other initiatives with national impact and relevance, recognizing that her approach does not have to start with a school. She trains people in projects dealing with power and gender relationships (for instance, between women and the police) and helps them to understand how their relationships affects others—especially children—around them.
In five years, Jacqueline will have consolidated MaDad’s operations into a launch base for further expansion. HIA implementation modules and comprehensive teacher training modules are Jacqueline’s tools to expand her operation. Extensive outreach activities are planned in local communities, paving the way for MaDad facilitators to change mindsets and the perception of the education process in these communities. In ten years, MaDad will establish a national and regional network of individuals, communities, and organizations that will form alliances within the field of education and across the sectors. This network of trained teachers and parents will influence regional educational discourse and expand it to include a wider sector of the community; to instill a culture of proactive learning.
Jacqueline’s idea and methodology has moved beyond Palestine. She is teaching teachers and training educational experts in both Jordan and Yemen.

Jacqueline is proud to be a daughter of a refugee. Her father was a dentist evicted from West Jerusalem for Beit Jala with nothing but his shirt and his education. Jacqueline’s father instilled in his children the will to survive and excel in their work. Uprooted from his own home, he taught them the benefits of perseverance and commitment to their values, beliefs, and goals. This family context provided Jacqueline with the means and tools to face many challenges.
As a child at primary school, Jacqueline was discriminated against by teachers due to her learning disability: A short memory span and an inability to memorize. In an educational system that is based on memorization, Jacqueline was unable to perform well. The authoritarian system and teachers did not try to find a solution for her problem. This attitude and the results of early exams negatively affected her self-esteem and confidence. Not until she excelled in her primary certificate did she realize the problem was not with her but the educational system. So, she has dedicated her life to changing a system that left a nine-year-old child feeling worthless and to protect other children from the same experience.
Jacqueline’s vision, commitment, and innovative effort to reform the education system began in Palestine more than twenty years ago. In 1982 she began work with the Mennonite Central Committee family program in Palestine; responsible for responding to requests from kindergarten students requiring help. This experience gave Jacqueline a realistic picture of early childhood education under the military’s presence. Later she began to work on a large-scale assessment of preschools that allowed her to identity system-wide problems.
Her work at the Faculty of Education at Bethlehem University (1984 to 2003) provided the opportunity to put into action the child development theories she had studied to develop a child-centered model of teaching at the preschool level. It quickly became apparent that the model worked well with children but was challenging for teachers—often ill-prepared to assimilate new methodologies, so her attention shifted to enabling the teachers of young children to implement child-centered models.
For several years Jacqueline focused on teacher professional development, helping numerous teachers evaluate their own work and improve the way they engaged students. Teachers were encouraged to reflect on their practice and try several different techniques and styles within the classroom, and then review what was successful. This enabled teachers to explore the real-life implications of diverse theories that are discussed in university and teacher-training programs.  Gradually, it became clear that teacher education could not be the sole venue for implementing educational reform, because the existing education system does not accommodate change.
During Jacqueline’s eight-teen years at Bethlehem University she succeeded in changing and shaping the minds and attitudes of hundreds of teachers sent to work in schools. However, the teachers faced many obstacles and she discovered that unless the educational system and the broader context changed, education as learning and development would not be implemented or succeed. Jacqueline boldly resigned from her job at the university and founded MaDad, to promote and institutionalize her idea and approach.