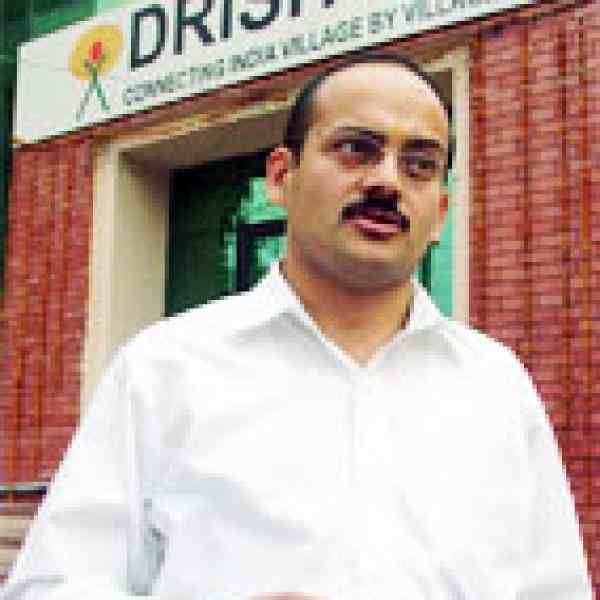 In rural India, villagers live without easy access to trade, government, business, and health information. This makes them easy prey for intermediaries who control the flow of information and can demand high payments to allow villagers access to it. Satyan is building service kiosks in countryside villages to bring internet connections and ready, affordable access to information.

Rural villages in India are often cut off from the outside world; without any local government outposts, it’s hard for villagers to find accurate information about government benefits, trade and exchange rates, or health care. To help bring these isolated villages into the global information network, Satyan has created a system of service kiosks where people can access public internet terminals and receive information pamphlets at low cost. The kiosk owners are drawn from the local community and selected for their civic-mindedness to ensure that villagers won’t be overcharged for accessing information. Satyan trains and helps each kiosk owner, providing him with capital, holding his hand, and monitoring his progress. Public demand determines the range of products and services offered, which may include government data, agricultural data and commodity prices, medical and health information, insurance products, and photo facilities. Although the initial model is a one-way, service model, bringing city goods to the countryside, Satyan sees a future for a two-way channel, where rural products and services are made available to the urban population.

The Internet has led to increased global connectivity, linking people from all over the world and contributing to the free flow of vital information across borders. For many, the Internet is the easiest and most affordable way to access information on such important topics as politics, health, agriculture, and business. In rural India, though, few people have felt the advantages of the Internet. Most people do not have their own private home connections, and so used to rely on government-funded public information and service kiosks to learn about these topics. However, many of these old kiosks were staffed by salaried government workers, who had little incentive to provide good customer service or help confused villagers understand how to use their services. Despite their enormous potential, many of these old kiosks have been discontinued in recent years because they were never successfully integrated into the local communities.

Without these kiosks, people have few alternatives for finding information. The long distances between cities and villages create an information gap that give rise to middlemen, who make their living by controlling the flow of information. They demand high sums to dispense the same information to rural villagers that urban dwellers can access for free on their own private Internet terminals. Since Indian villagers have no alternative way to get this information and often don’t even realize that this information could be obtained elsewhere at lower cost, they end up spending much of their limited resources on these inflated costs.

Vital to the plan is that kiosk owners think not only about revenue but also about the good of their customers. The kiosks are staffed and owned by village locals, who view the kiosk as more than a money-making venture but also as a way to help the village.

Kiosks generally are only financially viable in villages with at least 1,200 families. Before setting up a center in the region, Satyan has to get permission from the district authorities. Satyan’s team then carries out a detailed feasibility survey that looks at a village’s telecommunication situation, its literacy level, and its ability to pay for kiosk services. Once Satyan is satisfied that a village could support a kiosk, he, in co-operation with the local governing body, CSOs and other organizations, begins a search for local entrepreneurs interested in running and owning the kiosk.

The selected candidates undergo a 16-day entrepreneurial development and computer training course and carry out a need-based survey to determine the demand for specific cost-saving products and services. The average cost of setting up a kiosk is Rs.85,000, out of which the future owner initially contributes Rs.15,000. Whatever cost the entrepreneur can’t cover is covered by loans from the State Bank of India, a nationalized bank, or ICICI, the country’s largest private bank.

The typical entrepreneur has usually completed 10 years of schooling. Because it is, in part, a private, for-profit business, kiosk entrepreneurs are encouraged to provide the best possible service to attract villagers to come back again and again. At the same time, because kiosk entrepreneurs are all locals, they do not exploit their neighbors the same way that outside information-peddling middlemen do.

Satyan plans to extend the lower start up costs as incentives to draw in more woman applicants to become local entrepreneurs. The kiosk is established in a prominent location—the building of local government headquarter, the intersection of major roads, the weekly marketplace—and serves 25-30 surrounding villages or around 20-30,000 people.

The kiosk entrepreneur runs his kiosk independently, but Satyan monitors the venture to ensure that it remains beneficial to the community. The kiosk provides access to information like government records, agricultural data, and health insurance; help in filing of applications for licenses, certificates, compensation, and benefits; commodity product rates in different markets; education such as computer courses, distance learning courses, and the Indira Gandhi National Open School (IGNOU). The computer education courses have particular significance in that Satyan anticipates that Indian companies will soon be outsourcing business to contractors in small towns and villages. Before entering a region, Satyan enters into a grievance redressal commitment with the district authorities to ensure a prompt response to both complaints and certificate requests filed through the kiosks. He also requests that the District Collector (the local administrative officer) nominate a point person in each government department so that the kiosk entrepreneur will have someone to refer to when necessary.

With easy access to a global communications network, the villagers have the information necessary to effectively auction their land, agricultural machinery, bullocks, equipment or other durable commodities without the involvement of intermediaries. According to an impact assessment, eliminating the intermediaries has resulted in a 3 to 5 percent increase in the farmers’ income.

“In pipeline” is a rural e-commerce service that removes intermediaries from the lives of village producers like artisans and craftspeople, enabling them to demand a better price for their products. The pilot will be launched in Assam.

Born to a middle-class family of Bihar, Satyan has always has a strong bond with his ancestral village in Madhubani. At the age of 8, he saw how a successful watershed management project near his village changed the lives of the villagers. The project blockaded the wild river in the village, preventing floods and providing river silt to enrich eroded land. The withdrawal of international funds brought the project to an abrupt end, and put the villagers back in the same situation they’d been in before—farming eroded land while always being threatened by floods. The rural poverty Satyan saw around him in his childhood had a strong influence on his thinking today.

Satyan’s father died while Satyan was in college in Delhi, leaving Satyan responsible for his family’s upkeep. He started tutoring young students to earn enough to take care of his family. A computer-related job sparked his interest in the Internet’s capacity to benefit rural Indians, so when he was invited to be part of a Madhya Pradesh state government e-governance project in 1999 he seized the opportunity. The Gyandoot project, started in 1999, used salaried state government to provide government information through information kiosks. Unfortunately, the employees did not do enough to promote the service, and villagers did not know how to use the centers. Satyan proposed using trained rural entrepreneurs to run the kiosks. Being locals, these entrepreneurs could better connect with the villagers and would be more likely to promote the kiosks rather than letting them languish. The idea seemed to work, and 309 kiosks are now operating throughout the country.

The Gyandoot model won the Stockholm IT Challenge Award of 2000, and in 2003, Satyan’s Drishti model won the Development Market Place Award (World Bank).

Down the road, Satyan hopes to run a kiosk of his own, ideally in his native village of Madhubani. Satyan lives in New Delhi with his wife and daughter.