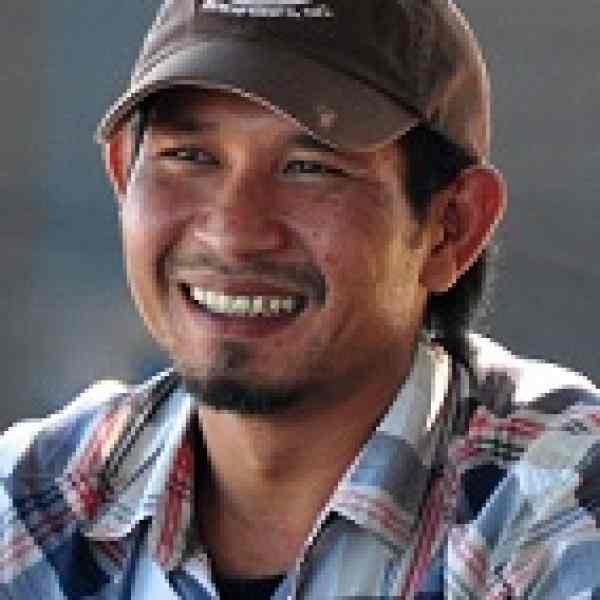 Wichoksak Ronnarongpairee is creating a new market of sustainably captured seafood, to ensure the economic survival of small-scale fishers who are the most motivated protectors of Thailand’s coastal resources. Previously dismissed as scattered and invisible producers, small-scale fishers are now taking ownership of the seafood market and branding their products to create added value based on sustainable fishing practices. Wichoksak has developed pilot models of community fishing ports along Thailand’s coastline, owned and operated by local fishers. He initiated a certification system for sustainably caught seafood, the first of its kind in the Thai domestic market. He is also creating consumer demand by generating widespread public recognition about the valuable role of small-scale fishers both as producers of quality seafood and as proactive guardians of coastal resources, through seafood trade fairs, fishing derbies and online campaigns. As a result of Wichoksak’s efforts with consumer markets and mass media, there is a growing public interest in safe and sustainable fishing, pressuring large-scale fishers to develop new products of sustainably captured seafood. To ensure long-term competitiveness, Wichoksak has established the first national trade association of small-scale fishers in Thailand, which functions in harmony with small-scale fishers’ trade associations set up in local communities. With economic and civic presence, small-scale fishers are beginning shift the direction of Thailand’s coastal resource management policies, including the successful campaign led by small-scale fishers to halt the use of destructive fishing equipment and the first local government ordinances declaring coastal preservation zones for sustainable fishery.

Although small-scale fishers are the majority population, they have access to a decreasing share of coastal resources, due to unsustainable and sometimes illegal fishing practices by large-scale operations. For instance, many large-scale fishing boats in Thailand still use bottom trawlers – nets that drag along the bottom of the sea, destroying marine ecosystems and indiscriminately catching young aquatic life along with target species. Since 1972, Thailand banned the use of bottom trawlers in coastal areas, defined as the area within 3,000 meters from the coastline. However, more and more bottom trawlers are granted fishing permits each year, and officials often turn a blind eye when trawlers cast their nets in coastal areas. Overfishing is a severe problem in Thailand. When the country first announced national plans to promote industrial-scale fishing in 1961, the average catch volume in the Gulf of Thailand was 298 kilograms per hour. Since then, the average catch volume has plummeted to 39 kilograms per hour in 1981, and only 3 kilograms per hour in 1999. In addition, the Department of Fishery surveyed the contents of seafood catch from large-scale trawlers and found that 19.2 percent contained juvenile economic fish, further limiting the sea’s ability to regenerate.

Thai fishing regulations reflect a cultural bias against small-scale fishers. The skills of resource management involved in small-scale fishing are not recognized as valid technical knowledge. There is an underlying stereotype that fishers are poor and ignorant. Until late nineteenth century, Thai law prohibited fishers from serving as witnesses in court, deemed unreliable alongside beggars and thieves. Today, there are no mechanisms for small-scale fishers to participate in policy decisions about fishing resource management. For example, no small-scale fisher has served on the Advisory Board to the national Department of Fishery, the sole authority in managing fishing resources according to the Fisheries Act of 1947, which still in effect. In 2007, Thailand adopted a new constitution which guarantees the rights of local communities and local governments to jointly manage natural resources, but the idea has yet to be put into practice by Thailand’s largely centralized government structure.

Wichoksak is setting up a community-owned supply chain and direct retail market of fresh seafood products. At the local level, Wichoksak encourages fishers to form cooperatives and set up their own purchasing stations, known as community fishing ports. As owners of these ports, small-scale fishers are able to determine fair and competitive purchasing prices. Wichoksak’s team links these community-owned fishing ports to nearby urban markets of fresh seafood products. For the first time, small-scale fishers can capture the profit margin from their retail products, at an average rate of 100 to 200 baht per kilogram of seafood. Nicknamed “Blue Brand,” these products highlight the unique advantages of small-scale fishing: fresh seafood from overnight catches, safe from chemical preservatives, sustainable caught using traditional fishing equipment, and identifiably local. Consumers know which bay their food comes from, and fishers take pride in their trade. Since 2011, Wichoksak has been able to set up five pilot models of community fishing ports in five provinces, on both the western and eastern coastline. He is collaborating with experts in organic certification to design a quality certification system for sustainably captured seafood. The certification board includes small-scale fishers alongside consumer representatives, academics, and citizen sector organizations working in coastal communities.

Because Blue Brand is the first certification system for Thailand’s domestic seafood market, Wichoksak is devoting much effort into creating new alliances between fishers and consumers. In collaboration with fishing communities, he organizes annual fish fairs that last three to four days with thousands of participants, with the goal of stimulating the market for conscientious consumption and create face-to-face interaction between fishers and urban consumers. In addition, Wichoksak collaborates with coastal fishing communities and local governments to organize annual fishing derbies. At these derbies, both professional and amateur fishers compete to be the one who catches the largest fish in 24 hours, using small-scale fishing boats. This contest demonstrates to the local public that small-scale fishing is as capable of catching large fish as industrial fishing. The contest also demonstrates the level of fertility in coastal areas. Wichoksak publicizes these events through local media as well as online media, including a facebook group managed jointly by his network of citizen sector organizations called Fish Eaters Unite. With nearly 24,000 online members, urban consumers participate actively in this facebook group to share a variety of dishes featuring diverse species of fish. Like the fish fairs and fishing derbies, this online media is a simply and interactive marketing tool which indirectly creates demand for Blue Brand products.

Wichoksak plans to set up an entire supply chain of sustainably captured seafood products, with increasing collaboration from the government and the private sector. In 2013, Wichoksak invited a private frozen food business, Chokewiwat, to share experiences with small-scale fishers. In the same year, the Department of Fishery donated a one-ton freezer to Koo Kood Community Fishing Port in Songkhla province, one of Wichoksak’s pilot models. Established in 2005, this community-owned fishing port is a cooperative with a membership of over 200 households spanning three districts. Members agree to fish using nets of at least 5 centimeters in radius, to prevent catching young aquatic life. Profits from this cooperative are partly invested in increasing the local population of black tiger shrimp, a major economic product. Other community fishing ports invest profits in different marine seed banks, depending on the local ecosystem and local market demand.

To ensure long-term competitiveness, Wichoksak set up the first national trade association for small-scale fishers in Thailand. Registered in 2010, the Federation of Thai Fisher Folk Association now has a growing membership of 15 local trade associations in 17 coastal provinces, representing some 3,400 fishing villagers. The trade association’s president and others in the leadership team are elected by members who are small-scale fishers, while Wichoksak has been elected to serve as manager. Wichoksak set up a legal working group to follow developments in fishing-related policies and regulations and ensure the participation of small-scale fishers. In 2012, Wichoksak worked with hundreds of fishing communities and community leaders to gather 10,000 signatures and introduce a citizen’s draft revision of Thailand’s outdated fishing laws to parliament. They called for decentralization of power and increased participation of small-scale fishers and local governments in coastal resource management policies. In 2013, the Federation of Thai Fisher Folk Association successfully prevented the government from allowing 2,000 new permits for pair trawlers, already declared illegal for ecologically-destructive fishing methods. Policymakers are beginning to recognize small-scale fishers as a legitimate trade representing the majority population of Thailand’s fishing communities. The Department of Fishery created a permanent seat on the National Fishing Policy Planning Board for the Federation of Thai Fisher Folk Association. For the first time, small-scale fishers are respected as equal partners in negotiations with other stakeholders.

By creating a new supply and market demand for sustainably captured seafood in Thailand, Wichoksak is also creating incentives for large-scale fishers and related industries to develop more sustainable products. In response to Wichoksak’s media campaign about unsustainable fishing practices in mid-2013, Thailand’s largest buyer of fish meal CPF announced a new policy to reduce the purchase of fish meal from destructive trawlers and guaranteed to pay a higher price to ensure the purchase of sustainably captured fish products. The Thai Feed Mill Association announced that its members will follow suit by 2015.

Over the next two years, Wichoksak expects nine retail markets to regularly sell Blue Brand products. He is also preparing to open Blue Brand restaurants owned by small-scale fishers as pilot models in at least three major cities near the coast. To reinforce economic survival with civic empowerment, Wichoksak continues to support fishing communities scattered along Thailand’s coastline to set up local trade associations and become members of the national association. He expects the Federation of Thai Fisher Folk Association to increase its representation from the current membership in 17 provinces to cover all 23 coastal provinces. In addition, Wichoksak and the Federation of Thai Fisher Folk Association are currently in negotiations with local and national governments to set up a coastal conservation zone along Thailand’s entire coastline, extending 3 nautical miles from shore. As of 2014, their negotiations have been successful in 10 coastal provinces. They expect to expand the conservation zone to all 23 coastal provinces, to preserve the coastal area for sustainable fishing practices and resource rehabilitation.

Wichoksak was born and raised in a rural district of Satun province, on the Andaman coast of southern Thailand. As a child, he spent free time catching food from the sea to help make ends meet for a family of ten siblings. Wichoksak overcame economic obstacles and became the first and only member of his family to graduate from university, with a bachelor’s degree in history in 1997.

Immediately after graduation, Wichoksak applied for a volunteer service program and placed in a fishing village for two months. There, he earned enormous respect for fishers who taught him in-depth understanding of society, in contrast to the widespread stereotype that fishers are ignorant. For the first time, Wichoksak began to see the world from fisher’s eyes.

In 1998, Wichoksak chose to work with a person living with HIV to help create a network of people living with HIV, at the height of public discrimination. He learned the skills and crucial significance of community building, to boost self-confidence and public respect for marginalized people. To this day, Wichoksak applies this principle to his work with fishing communities.

Since 1999, Wichoksak has worked in several organizations focused on coastal resource protection in Southern Thailand. He began to witness a growing gap between conservation efforts and the economic survival and well-being of small-scale fishers. Many fishers who led conservation efforts still died in poverty. In addition, some conservation efforts resulted in violent endings, including one fisherman’s assassination. Influenced by these experiences, Wichoksak vowed to create a win-win solution that preserves coastal resources for small-scale fishers while also protecting their quality of life and civic rights.

In 2011, Thailand’s National Human Rights Commission selected Wichoksak to serve on its Subcommittee on Community Rights, where he advises and inspects cases of violations against local community rights to participate in the management of natural resources.